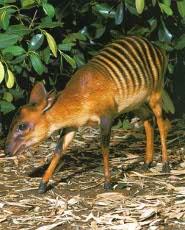 The zebra duiker (Cephalophus zebra) is a small, strikingly marked antelope with a coat striped like a zebra. Unlike the white background of a zebra’s coat, however, the base color of this duiker’s coat is more tiger-like, ranging from a pale cream or gold to dark reddish hues. The dramatic dark stripes on the zebra duiker begin just behind its shoulders and continue to the end of its rump. The approximately 12 to 15 stripes run over the top of the zebra duiker’s back and down each side. No two zebra duikers will have the same markings. In addition to the stripes, the zebra duiker has dark markings on the top of its legs and on its muzzle.

For the first two months of its life, the coat of a baby zebra duiker has a bluish hue to it. As the animal ages, the coat gradually changes to the lighter coloration of the adult zebra duiker. The zebra duiker is a compact, stocky animal, with a rounded back and short limbs. It stands approximately 40 to 50 centimeters or about 1.3 to 1.6 feet at its shoulder. The adults weigh an average of 17.5 kilograms or 38.5 pounds. In general, the females are larger than the males. Both the male and the female zebra duikers have short horns. Unlike other duikers, the zebra duiker does not have a tuft of hair on its forehead.listofcountriesoftheworld.com/iv-animals.html" title="" rel='external'>Cote d'Ivoire, and includes much of the country of Liberia, as well. Zebra duiker sightings have also been reported in the Ziama and Diecke Forest Reserves in the country of Guinea. Zebra duikers prefer to live in primary lowland forests, but can also be found in some montane and upland forest areas. They are very sensitive to habitat destruction and prefer to live in areas that have not been disturbed by deforestation. The zebra duiker feeds on fruit, as well as leaves and grass. Because the zebra duiker is so small, it depends a lot on other animals accidentally dropping fruits and other edible treats from trees. The skull of the zebra duiker has a hard frontal bone, which it uses to crack apart hard-to-open fruits.

Because the zebra duiker is so small, it has many predators, including Africa's many species of big cats and even its birds of prey. The zebra duiker is also poached by humans for its meat. Currently, the zebra duiker is listed as vulnerable on the IUCN's Red list. The IUCN site states that over the last 15 years, the little antelope's population has fallen as much as 30 percent. The main culprits behind the zebra duiker's decline are deforestation, which has led to increased loss of habitat, and hunting. Although, Liberia still has a swath of suitable habitat for zebra duikers, it is believed that in other areas, the little antelope's population will continue to fall and that its status will eventually decline to Endangered or Critically Endangered.

Picture of the zebra duiker by Kispál Attila, licensed under GFDL

The Banded duiker, zebra antelope, zebra duiker is listed as Vulnerable (VU), considered to be facing a high risk of extinction in the wild, on the IUCN Red List of Threatened Species

Some facts about the
Zebra duiker