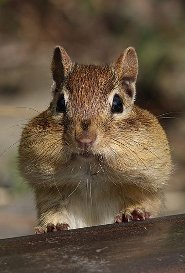 The Eastern Chipmunk (Tamias Striatus) is a chipmunk, a squirrel-like rodent. There are 5 dark-brown strips on the upper part of their reddish brown coat in contrast of the light brown strips on their back and the very light brown ones at underside. There is a tiny strip that starts from their whiskers and goes towards the lower part of their ears and they have a light strip above their eyes. The color of their tail is dark brown. The body mass of an average eastern chipmunk is 2.82 - 5.28 oz (80 - 150 grams) and their length is 8.46 - 11.22 inches (21.5 - 28.5 cm). Just like other relatives of their family, they also have pouches in their cheeks, which they use to transport their food. When these pouches are full of food, they may become as big as their head.

Eastern Chipmunks are mainly found in deciduous forests, urban parks of Eastern United States, and Southern Canada. In order to provide themselves with a shelter, these Chipmunks generally prefer locations where there are shrubs and rocks.

Although Eastern Chipmunks are able to climb trees, they construct their nests under the ground with widespread tunnel systems which may have several entrances. They store food for winters in their burrows and during winters, they stay in the burrows for long periods but do not

Females give birth to 1 or 2 litters per year and there are 4-5 young ones per litter. There are two breeding seasons, one being from February to April and the other from June to August. The gestation period lasts for 31 days. The birth mass of a baby chipmunk is about 0.12 oz (93.40 gm). The weaning time is 6 weeks. Both the male and the female eastern chipmunks reach their sexual maturity at the age of one year. They live perhaps only one year in the forest but in captivity, they may live up to eight years and their lifespan is 2 to 3 years on an average.

In order to protect their burrows, eastern chipmunks hide their burrows with dirt, which they carry from other places in the pouches of their cheeks. They do this to prevent themselves from being hunted easily. They hide their burrows with materials like sticks, leaves, rocks, and plant materials so that they cannot be easily seen. They store food in great quantities for winters in these burrows. They do not hibernate during winter and wake up time and again to have food.

Since they can make several bird-like chipping sounds, they have got their name Chipmunk. The Eastern Chipmunks are very active during the daytime, spending most of their time in search of food. They like to eat seeds, bulbs, nuts, fruits, mushrooms, green plants, bird eggs, insects, and worms. Hawks, foxes, weasels, cats, snakes, and raccoons are their main predators.

The Eastern chipmunk is listed as Least Concern (LR/lc), lowest risk. Does not qualify for a more at risk category. Widespread and abundant taxa are included in this category, on the IUCN Red List of Threatened Species

Some facts about the
Eastern chipmunk