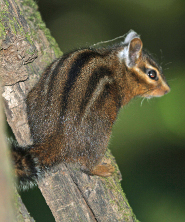 Allen’s chipmunk (Tamias senex) and (Neotamais senex) is also called the shadow chipmunk and the large mountain chipmunk. There are two varieties of this species, depending upon where they are found. This rodent lives in a very limited range in comparison to other chipmunks in the United States. They are found only in chaparral, redwood or conifer forests in California, Nevada and Oregon. Those on the mainland are larger than those found on small islands off of California and Oregon’s coasts.

Allen’s chipmunk is listed as a species of "least concern" by the International Union for the Conservation of Nature (IUCN.) However, should the forests vanish, so would the wild populations of Allen’s chipmunk. Although they nest in trees or in underground burrows, they need to feed on the ground or in dense shrubs for seeds, mushrooms and fruit.

Allen’s chipmunk appears similar to a common chipmunk, but it has longer ears that end in points. The furry tail is also much longer and sleeker. Their profiles more resemble a cat’s profile than a chipmunk’s. Their coats are various shades of brown with bright white stripes but the Allen’s chipmunk variety that lives on islands has a darker shade of brown in comparison to the common chipmunk. Allen’s chipmunks that live on the mainland come in lighter shades of brown. While males weigh an average of 3.17 ounces (90 grams) adult females can tip the scales at 4.23 ounces (120 grams.) Males have a total body length of 9.76 inches (248 millimeters) females can grow up to 11.06 inches (281 millimeters.) Allen’s chipmunks can vary slightly in size depending on where they live. The largest of both males and females live in redwood forests closest to the sea.

Not much is known about the behavior of Allen’s chipmunks due to their timidity. Although they are active during the day, when biologists prefer studying animals, they try to stay hidden for as long as possible. This keeps them away from the eyes of predators like coyotes, birds of prey or domestic cats. There are plenty of hiding places for Allen’s chipmunks in shrubs, trees, cracks in rocks, long grasses or undergrowth. They make "chuck-chuck" noises that sound similar to the pine squirrel.

Chipmunks live solitary lives and will fight other chipmunks to protect their territories. Females, due to their size, hold larger territories than males. Depending on where they live, an Allen’s chipmunk will hibernate or keep active all year round. Those in warmer climates in California have access to food all year long and do not need to hibernate. Females can have up to 5 babies in their litters and have one litter per year. Both females and males make their nests in trees as high up the tree as they can. Those that hibernate dig a burrow underground and spend the winter there.

Picture of the Allen's chipmunk by Greg Schechter, licensed under the Creative Commons Attribution 2.0 Generic license .

The Allen's chipmunk is listed as Least Concern (LR/lc), lowest risk. Does not qualify for a more at risk category. Widespread and abundant taxa are included in this category, on the IUCN Red List of Threatened Species