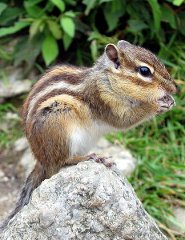 The Siberian Chipmunk (Tamias sibiricus) is the only member of its genus that lives outside America. Ranging from Russia to China, northern Japan, Korea, and northern Asia, its main habitats include woodlands with thick bushy vegetation.

Its total length from head to tail is 18 to 25 cm (3.93 to 9.84 inches) of which one third is occupied by its tail. The weight of an adult Siberian chipmunk varies according to the season but normally, an adult Siberian chipmunk weighs about 50 to 150 grams (1.76 to 5.29 oz). When compared to its other relatives such as the red squirrel, it is rather smaller in size.

The Siberian chipmunks are omnivorous animals and feed on mushrooms, shrubs, small birds, berries, and small animals. Their diet includes conifer seeds, nuts, and vegetables and they also eat tree buds, wheat, buckwheat, and oats. Chipmunks also prey lizards and insects. Mustelids, cats, and birds are the main predators of the Siberian chipmunk. This species can prove dangerous since it can spread grave diseases like rabies by its bite. Siberian chipmunks have made colonies in some parts of central and Eastern Europe, since they escape easily from captivity. They are not much active during winters but generally avoid sleeping for a long time in heated rooms. Their lifespan is short in the wild but in captivity, they can survive for more than 10 years. It is a universal fact that animals born in captivity become disciplined to some extent. The Siberian chipmunk generally enjoys feeding on vegetables, fruits, rodent lab-blocks and nuts.

Like its relatives, it has bright colored fur with dark stripes, and large pouches in its cheeks to collect food. Its ears are small and rounded up at the ends. The color of its fur depends on the origin of the animal. The fur is brown grey or tawny yellow. Along its flanks there are five dark and four light colored long stripes. The color of its tail is light brown and there are thick black lines on both sides with small white edges.

They mainly live in forests. Their needle-pointed claws make them a superb climber but most of the time, they stays on the ground. They construct lodges on the ground to live in and in order to store food, the Siberian chipmunks bury their food 5 to 7 cm under the ground. They are hygienic and clean themselves from head to tail. Sometimes, they even clean one another. They make various sounds including a bird-like 'cheep' short whistle which lasts only for 1 or 2 seconds. They make this sound 5 to 6 times constantly when they smell any danger. They are most active during the day time.

The Siberian chipmunk is listed as Least Concern (LR/lc), lowest risk. Does not qualify for a more at risk category. Widespread and abundant taxa are included in this category, on the IUCN Red List of Threatened Species

Some facts about the
Siberian chipmunk