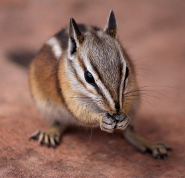 The Uinta chipmunk (Tamias umbrinus), is a small mammal of the Rodentia order. Their native habitat is amongst coniferous trees in 8 states located in the Western United States. Utah, Nevada, and parts of Arizona, Colorado, California, Idaho, Wyoming and Montana are the places where this tiny furry forest denizen lives. Although the chipmunk is mostly arboreal, typically nesting in or within trees, it may burrow under rocks, logs or brush.

The Uinta chipmunk is in a medium range of size and weight for chipmunks, weighing in at about 59g and at about 225mm long. As is the case with Tamias in general, the females outsize the males. Their coloration is slightly different with regards to the stripes on their backs, but for the most part, they look very similar to other species of chipmunks.

Typically, they have large fur-lined cheek pouches for collecting food to be transferred to their nests and other caches where they store food for the winter months. Their diet consists mainly of berries, nuts, fruit, conifer mast, and maple, chokecherry and juniper seeds. Occasionally, however, they will supplement that with pollen, fungi, insect larvae, buds and even birds' eggs.

Due to their propensity to hide and eat seeds, the Uinta is also largely responsible for the spreading of seeds in the forest, resulting in a helpful regeneration of timber. Their contribution to the growth of new trees is substantial and is their most helpful benefit to humans.

In the spring, after their hibernation period ends, they build their nests in underground burrows, tree cavities, or even birds' nests that have been abandoned. Being promiscuous in nature, either sex may mate with multiple mates; permanent pairing is not a part of their mating habits.

Their matings typically occur in the spring after hibernation and nesting. Litters consist of 4 to 5 young after approximately one month of gestation. The young are nursed for a month or two until the young are able to fend for themselves. Before the following winter, the young will have separated from the nest and dispersed to live their own lives. By the following spring, they are mature and will reproduce. Their lifespan is about 8 years.

Predators of the tiny chipmunk are typically weasels, red or gray foxes and their kits, bobcats, coyotes, hawks and other raptor type birds.

Tiny though they are, their contribution to the forest is immeasurable.

The Uinta chipmunk is listed as Least Concern (LR/lc), lowest risk. Does not qualify for a more at risk category. Widespread and abundant taxa are included in this category, on the IUCN Red List of Threatened Species

More animals beginning with U