The Fox Squirrel - The Largest Tree Squirrel of North America 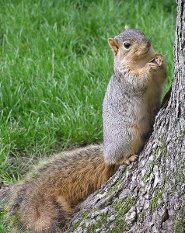 The Fox Squirrel (Sciurus niger) is the largest squirrel among all the tree squirrel species found in North America. It is also known as the Raccoon Squirrel, Stump-eared Squirrel, Monkey Faced Squirrel, and Red Squirrel. Although there is a difference in their size and coloration, people mistake this squirrel for the Eastern Grey Squirrel in areas where both the species coexist.

The fox squirrels are found almost everywhere in Eastern America, excluding Colorado, Texas, west of Dakotas, New England, and the southern parts of Canada. They have also been introduced to Southern and Northern California. They have a very versatile choice in terms of their selection for habitat. They are seen in forest patches spreading to 400,000 sq. m. They are also often found near urban developments where there are plenty of trees. They habitat best in areas where oak, walnut, pine, and hickory trees are found in abundance, since they produce food-like nuts which are stored for the winter.

The total length of an Eastern Fox Squirrel measures 17.71 to 27.55 inches (45 - 70 cm) with its tail measuring 7.87 to 13 inches (20-33 cm). Its weight also varies with its size. It can weigh anywhere from 1.1 lbs to 2.2 lbs (500 - 1000 grams). The animals in the eastern parts are bigger. There are three variations in its color according to the geographic conditions in which it is found to exist. In the southern parts, it is found with only black color coat while in eastern regions, it is dark brown or black with stripes on its face and its tail and in rest of the areas, it is found with a brownish yellow or a grayish brown coat. The fox squirrels have very sharp claws, flexors of forearms, and very well-developed extensors which help them in climbing. They have exceptionally good vision and their smelling and hearing senses are also well-developed. For communication with other squirrels, they make markings along with a specific scent.

Tree seeds are the first choice of Eastern fox squirrels when it comes to food. They also feed on fruits, buds, insects, food grains, small snakes, lizards, and birds eggs. Fox squirrels are considered as diurnal and non-territorial animals. Unlike other squirrels, although most of their time is spent on the ground, they are still swift climbers. They construct their house called 'dreys' according to the season.

These fox squirrels have two breeding seasons, in June and in December. The young ones have no fur at birth and are blind and helpless. After three months of their birth, they become independent and in one year, they reach their sexual maturity. In wild, they live only for seven months on an average while in captivity they are known to live up to 18 years.

Predators of eastern fox squirrels include humans, bob cats, hawks, snakes, and owls. Their agility is helpful to them to escape from their predators. They emit specific alarm calls to alert other squirrels when they are threatened. The increasing over-hunting and deforestation practices have put many species of this squirrel in danger.

The Eastern fox squirrel, fox squirrel is listed as Least Concern (LR/lc), lowest risk. Does not qualify for a more at risk category. Widespread and abundant taxa are included in this category, on the IUCN Red List of Threatened Species

Namings for the eastern fox squirrel

Some facts about the
Eastern fox squirrel