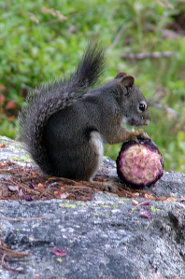 The Western gray squirrel (Sciurus griseus) can be regularly seen climbing trees, foraging for nuts, and leaping about forests and other woodland areas in the states of California, Oregon, and Washington. A small population of gray squirrels has also been found in the state of Nevada. The California Gray Squirrel is a popular nickname for these little furry friends, since there are so many of them throughout the area.

Western gray squirrels can become quite large compared to other types of squirrels. They can reach a length of 24 inches (60 centimeters) long including the tail, which contributes to half of its overall length. These squirrels usually weigh between approximately 12 and 32 ounces (350 and 950 grams). Part of what contributes to their weight is their large bushy tail.

These squirrels aren’t found in just any tree, choosing to live in oak and pine trees. They will occasionally live in valleys and foothills, but are most often in forested, deeply wooded areas. These squirrels will live inside the hollow parts of the tree or create their own home atop a tree out of moss, twigs, and other plant materials.

Western gray squirrels forage for food a large part of their day. Whatever food is not consumed is either hidden near their nesting spot or taken to their home itself. A daily squirrel diet includes nuts, acorns, pinecone seeds, bark, and berries. They have a wonderful memory of where they previously buried food, helping them keep a steady diet. Their strong sense of smell also helps them find any food they tucked away.

Oregon state has the Western gray squirrel on their list of sensitive species, since their number is continuing to fall in population. Washington classifies these squirrels as threatened in their state. Overall on a national level the U.S. Endangered Species Act does not include the Western gray squirrel, although if their numbers continue to decrease they may soon end up on the list.

Western gray squirrels are declining in numbers not only because of natural predators like snakes, owls, eagles, bobcats and mountain lions, but also because they are classified as game animals for humans to hunt. Other people that do not like squirrels around their property will put out traps that are not always humane and kill many squirrels off. All of these predators, both natural and man made, are a danger for squirrels.

The Western gray squirrel is listed as Least Concern (LR/lc), lowest risk. Does not qualify for a more at risk category. Widespread and abundant taxa are included in this category, on the IUCN Red List of Threatened Species

Namings for the western gray squirrel

Some facts about the
Western gray squirrel