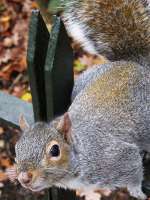 Remember when the Eurasian Red Squirrel was the animal of the day? Here is a quick reminder with an excerpt of that entry:

"On the European mainland and in the UK and Ireland, populations decline through the competition with the Grey Squirrels (Sciurus carolinensis) which were introduced from North America." (full entry here)

The native red squirrels are outnumbered by 66 to 1 by the grey squirrels in the UK. The population of reds is declining, because they are 'squeezed out' by the greys. Now, the UK biodiversity minister Jim Knight proposed "humane and targeted pest control". "Many people love grey squirrels, but the reality is that they are a real problem for some of our most threatened native species," he said.


Read more in this article on the BBC.

The Eastern gray squirrel, gray squirrel, grey squirrel is listed as Least Concern (LR/lc), lowest risk. Does not qualify for a more at risk category. Widespread and abundant taxa are included in this category, on the IUCN Red List of Threatened Species

Namings for the eastern gray squirrel

Some facts about the
Eastern gray squirrel