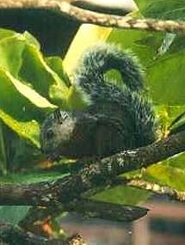 The Red-Tailed Squirrel (Sciurus granatensis) belongs to the Sciuridae, a family of rodents. These squirrels are found in the damp and dense forests and have an orange colored tail. They are comparatively smaller than the other common squirrels we usually find in cities

This bushy-tailed squirrel is found in Costa Rica, Trinidad, Columbia, Tobago, Panama, Venezuela, and Ecuador. The back and sides of this short-haired, furry squirrel is reddish brown in color, but some squirrels have a darker colored skin. The color of the tail of most of the red-tailed squirrels is rust-red and some of them have a black-colored tip. This little squirrel is just 20-28 cm (without tail) and has a long and bushy tail. Its weigh at birth is around 10 g (0.022 lbs) and adult weight is 374 g (0.8 lbs). It is found particularly at higher altitudes around 2,941 meters from the sea level.

The red-tailed squirrel is a terrestrial animal and is found on the Pacific slopes, wet forests, and in the Caribbean areas on land and trees. The most common places where these squirrels can be seen in plenty are the cloudy forests of Costa Rica. Many of them can be observed in and around the cities of Costa Rica and San Gerardo de Dota. Since these areas are hubs of apple orchards, these areas house a number of local birds and squirrels that feast happily on the apples.

In different geographic parts, these red-tailed squirrels vary in color, but all of them have partly or wholly red tails. The upper part of the red-tailed squirrel population found in Costa Rica is olive brown while their lower part is rusty orange in color. Although, in appearance, they look alike, the Variegated Squirrels (S. variegatoides), their counter parts, also found in Costa Rica, have tails with grizzled gray color.

Although these red-tailed squirrels thrive on apples, they happily feed themselves with other fruits as well. They enjoy eating hard nuts and other large seeds, leaves, twigs, flowers, eggs of tree frogs, and insects. These squirrels are quite territorial while the males lead a nomadic life and are not defensive like their females. You can see both the sexes enjoying the abundant mountain apples in the forests of Costa Rica and its surrounding areas.

The Red-tailed squirrel is listed as Least Concern (LR/lc), lowest risk. Does not qualify for a more at risk category. Widespread and abundant taxa are included in this category, on the IUCN Red List of Threatened Species

Namings for the redtailed squirrel

Some facts about the
Red-tailed squirrel