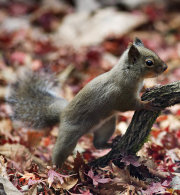 Japanese squirrels (Sciurus lis) are reddish grey and have tufted ears and bushy tails. In the Japanese language they are called 'risu', which is written with the Kanji characters for a chestnut and a rat.

The Japanese squirrel is distributed on the islands of Honshu, Shikoku, and Kyushu in Japan. Recently, populations on south-western Honshu and Shikoku decreased and those on Kyushu disappeared. One of the factors affecting to local extinction of this species seems to be forest fragmentation by human activities (source).

The Japanese squirrel is listed as Least Concern (LR/lc), lowest risk. Does not qualify for a more at risk category. Widespread and abundant taxa are included in this category, on the IUCN Red List of Threatened Species

Namings for the Japanese squirrel

Some facts about the
Japanese squirrel