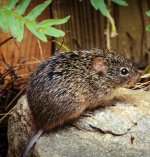 The Hispid Cotton Rats (Sigmodon Hispidus), are a kind of rodent considered to be prevalent in North America, South America and Central America. Still, from recent DNA sequence information, experts in the field are asserting that they could be subdivided further into three subspecies.

A Hispid Cotton Rat has a gray-enhanced coat of deep-brown hair. It has a dark tail, 5 sets of nipples but it has been known that it could have 6 sets. A typical Hispid Cotton Rat resides in grasslands and of course it is to be expected, as grass is its typical food for survival. They move about in both nighttime and daytime, and you may not believe this, but these Hispid Cotton Rats could swim (a fascinating datum). Its underparts go in colors of gray or white. It has small ears and ordinarily, covered by the fur...and...going back to the tail, it is thinly covered.

As far as breeding is concerned, these rats go on all throughout the year, and gestation time frame is close to a month. Size of the litter can go from 1 up to 15, with the Northern-living rats capable of still bigger sets. A young Hispid Cotton Rat is already well-formed right at birth, and its eyes would be functional within 36 hours (upon birth), the weaning period is approximately 2 weeks (in terms of days, that's 10 to 15).

The Hispid cotton rat is listed as Least Concern (LR/lc), lowest risk. Does not qualify for a more at risk category. Widespread and abundant taxa are included in this category, on the IUCN Red List of Threatened Species

Namings for the hispid cotton rat

Some facts about the
Hispid cotton rat