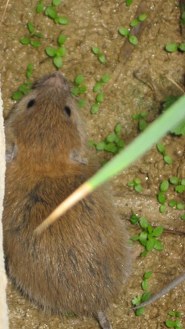 The Golden spiny mouse (Acomys russatus) is extraordinary in more ways than one. It is one of the relatively few animals that can switch from being diurnal or active during daytime to nocturnal and active at night. It is believed that since the Golden spiny mouse is not a combative animal, and often coexists with members of its same genus, it uses this ability to change to day or night activity so it does not have to compete for its food and other means of survival.

Still another trait that makes the Golden spiny mouse unique is the fact that it uses the "nanny" arrangement after the birth of its young. Most other animals care for their own newly born litters, but females of this species will actually nurse and care for the babies other females. So, in a way, a baby mouse is every mother's child. Litters usually consist of two or three but sometimes as many as five babies. They are born following a gestation period of 35 to 45 days. The babies are born completely covered with hair and with their eyes open and usually able to see. After a few days, they will leave the nest and are sexually mature and self sufficient after three months. The Golden spiny mouse typically lives three or four years, but some will live up to five years. They are found mostly in Egypt, Saudi Arabia, Jordan, Yemen, Israel, and Pakistan. They prefer terrain like dried up riverbeds and hillsides covered with rocks and boulders where they can get into cracks and crevices to escape predators. Enemies threatening them most are owls and other birds of prey, carnivorous mammals, snakes, and reptiles.

The Golden spiny mouse's average size is about 12.5 centimeters long or approximately 5 inches. Its average weight is around 53 grams or about 2 ounces. It is covered with bristly spines and on its back or dorsal area, the spines are thicker and more plentiful. Its tail is quite brittle and offers another somewhat curious feature. It is easily autotomized, or separated from the rest of the body.

Golden spiny mice seem to be slowly increasing in number. As more people inhabit the desert regions, their presence creates an extra source of food for this species of mice.

The Golden spiny mouse is listed as Least Concern (LR/lc), lowest risk. Does not qualify for a more at risk category. Widespread and abundant taxa are included in this category, on the IUCN Red List of Threatened Species

Namings for the golden spiny mouse

Some facts about the
Golden spiny mouse