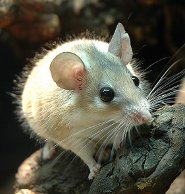 The Spiny Mouse (Acomys spinosissimus) is a small mammal, specifically a species of rodent of the Muridae family. It lives alone, or in small groups, inhabiting deserts, rocky terrain or dry woodlands. It is a nocturnal creature, but it does come out in early morning or late afternoon, keeping to the shadows. It is found in northeastern South Africa and the neighboring countries to the north and east: Malawi, Tanzania, Botswana, Mozambique, Zimbabwe, Zambia, and the Democratic Republic of the Congo.

The name Acomys spinosissimus literally means "sharp-pointed mouse," a reference to the stiff thick hairs that stand out from its back. It has large black eyes and enormous rounded ears, both well-suited for nocturnal activities. Like almost all other mice of the genus Acomys, the spiny mouse has a white or creamy underbelly; unlike most other mice of the genus, its upper body is reddish-gray. On the average, a spiny mouse is 6.7" (17 cm) long, including a tail that, by itself, is about 3" (8 cm) long. The average weight of a spiny mouse is just under one ounce, or about 28 grams.

The spiny mouse's tail is covered with sparse coarse fur, and can break off rather easily. It is thought that this fragility is a defense against predators, who, upon grabbing a spiny mouse by the tail, would then be left with only the tail. Unlike a similar predator defense found in some lizards, the tail of the spiny mouse does not grow back.

The spiny mouse eats seeds, green leaves, snails, insects, and millipedes. Predators who prey on the spiny mouse are the small wild cats, the mongoose, and various birds of prey native to South Africa, such as owls, eagles, falcons, hawks, harriers, and secretary birds.

The lifespan for a spiny mouse is anywhere from four to seven years. Spiny mice reach sexual maturity about two months after birth. Females can conceive at any time during the year. Once a female spiny mouse is pregnant, she gestates for about forty days before she gives birth. Most litters contain two or two pups, but some litters have been seen with six. Spiny mice are born with their eyes open, leave the nest at the age of three days, and are weaned in a little over a month. A female can conceive and produce up to twelve litters in a year, which is one reason the spiny mouse is not an endangered species.

The Spiny mouse is listed as Least Concern. Does not qualify for a more at risk category. Widespread and abundant taxa are included in this category, on the IUCN Red List of Threatened Species

Namings for the spiny mouse

A young / baby of a spiny mouse is called a 'pinkie, kitten or pup'. The females are called 'doe' and males 'buck'. A spiny mouse group is called a 'nest, colony, harvest, horde or mischief'.