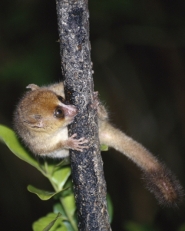 The brown mouse lemur (Microcebus rufus) is also called the rufous mouse lemur, the Eastern rufous mouse lemur or the russet mouse lemur. But no matter what it is named, this species is in danger of extinction due to habitat loss of their forests and marshes on the island of Madagascar. They are also hunted by people, domestic cats and dogs. This island, off the coat of Africa, is the only place brown mouse lemurs are found in the wild. It is difficult to keep in captivity.

This is one of the smallest lemur species in the world. Adults grow to a mere 4.92 inches (12.40 centimeters) long from their nose tips to the base of their tails. Like other mouse lemurs, their tails are about as long as their bodies. Tails average 4.53 inches (11.5 centimeters) in length. They not only can use the tails to help keep their balance in the treetops, but also can store fat in it. They tip the scales anywhere from 1.37 to 3.45 ounces (39 to 98 grams.)

Their fur varies in color from a rich golden red chestnut (or russet) to a light brown. Their bellies, insides of the legs and underneath the tail are pale grey or white. They have a cream-colored stripe on their face between their large eyes. Their eyes need to be so large in order to survive in complete darkness. Their noses are slightly pointed, like a hamster’s, and they have triangular ears.

Brown mouse lemurs live solitary lives and only come together to mate. Males mate with several females. Males have larger territories than females in order to gain breeding rights to these females. Females have a litter of one to three babies after a 60 day gestation. She nurses them for another 60 days. When the babies are a year old, they are ready to hold their own territories and breed.

Brown mouse lemurs eat insects, flower nectar, pollen, buds, fruits and flowers. They prefer to stay in thick foliage to hide from natural predators like the fossa, the ringtailed mongoose, the Madagascar harrier hawk and owls. With luck, the brown mouse lemur will live up to 8 years in the wild and 15 in captivity.

Picture of the brown mouse lemur by Iraiidh, licensed under the Creative Commons Attribution-Share Alike 3.0 Unported and GFDL.

The Brown mouse-lemur, rufous mouse-lemur, russet mouse-lemur is listed as Least Concern (LR/lc), lowest risk. Does not qualify for a more at risk category. Widespread and abundant taxa are included in this category, on the IUCN Red List of Threatened Species

Namings for the brown mouse lemur

A brown mouse lemur group is called a 'troop'.

Some facts about the
Brown mouse lemur