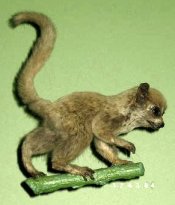 The arboreal Gray Mouse Lemur (Microcebus murinus) can be found in the forests of Madagascar, where they leap from branch to branch when moving, foraging is done closer to and on the ground. It is among the smallest of primates, 10 to 14 cm tall, with a 10 to 15 cm tail and have short limbs, big eyes, with thin incisors. A Gray Mouse Lemur usually has a grey covering, but the underside is light-colored. Reproduction period is from September to March, and in these periods, a female on average gives birth to two young.

The Gray Mouse Lemur is a solitary nocturnal forager and sleep during the day with others. Males sleep in pairs separate from the female groups (which can contain up to 15 individuals).

Their diet mostly consists of insects. It is also known that they could eat chameleons, leaves, flowers and fruits. In the world of lemurs, they are among the least-endangered. Reason: the tiny size and the multi-faceted diet that they have. That is not to say they are perfectly safe, the habitat loss is right now the number one threat to their numbers. Deforestation acts as the biggest risk to these lemurs.

The Gray mouse-lemur, lesser mouse-lemur is listed as Least Concern (LR/lc), lowest risk. Does not qualify for a more at risk category. Widespread and abundant taxa are included in this category, on the IUCN Red List of Threatened Species

Namings for the gray mouse lemur

A gray mouse lemur group is called a 'troop'.

Some facts about the
Gray mouse lemur