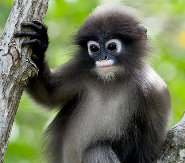 The Dusky leaf monkey (Trachypithecus obscurus), which is also known as the spectacled langur monkey and spectacled leaf monkey, is a very interesting looking creature. Large white circles ring each eye giving these adorable little primates the appearance of sporting eyeglasses, while a thatch of light fur also crowns its head.

In addition to the white circles around each eye, the dusky leaf monkey also has white skin surrounding its mouth region and creamy white coloring on its stomach region. Most of the rest of this monkey's fur is a dark gray, although some subspecies have brownish fur.

Although the adult dusky leaf monkey is typically gray or brown in color, the babies are born a very bright orange or yellow. After about six months, the baby's fur starts to turn gray, and by ten months, the young monkey has usually darkened to a gray or a brown, albeit a lighter shade than an adult.

There are seven subspecies of dusky leaf monkey, with the main distinction between each being the monkey's coloring and also the range in which it lives. For instance Trachypithecus obscurus halonifer lives only on Malaysia's Penang Island and is brownish in color, while Trachypithecus obscurus seimundi can be found on Thailand's Pennan Island and possibly a few parts of eastern Thailand. The latter is also brown in color.

Dusky leaf monkeys typically live in groups or troops that have an average of ten to seventeen animals. During the day, the troop will splinter into smaller groups to forage through the trees. Dusky leaf monkeys prefer to feed on young leaves, although it will also eat fruits, preferably unripe, and flowers. At night, the monkeys will regroup and then bed down for the evening in the trees.

Predators for this monkey include snakes and possibly large birds of prey. Humans also hunt these monkeys, and loss of habitat has become a problem for the dusky leaf monkey. Currently, these monkeys are listed as Near Threatened on the IUCN Red List.

Picture of the dusky leaf monkey by Robertpollai, licensed under the Creative Commons Attribution 2.0 Austria license.

The Dusky leaf monkey, spectacled langur, spectacled leaf monkey is listed as Least Concern (LR/lc), lowest risk. Does not qualify for a more at risk category. Widespread and abundant taxa are included in this category, on the IUCN Red List of Threatened Species

Namings for the dusky leaf monkey

Some facts about the
Dusky leaf monkey