Javan langur -- The Monkey With a Mane 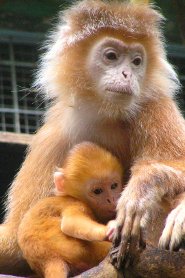 The Javan langur (Trachypithecus auratus) is a large monkey that sports a mane like a lion. They are also known as an Ebony letung or Javan letung. The adult Javan langur has long, black hair, which grows forward around the shiny black leather-like face giving it a unique look. The neck and chest are brownish colored. Some of the langurs are a reddish-gold in color even though black is the dominant color. The infant langurs are orange-red in color. Langurs weigh from 7.1-18.1 kg (15.7-40 lbs.). The Javan langur measures 44-65 cm (17.3-25.6 in) in length with a long prehensile tail of 61-98 cm (24-38.6in). The langur is diurnal and arboreal and rarely goes to the ground. However, when they do travel on the ground, they use all four limbs to walk. The Javan langur is found in Java, Bali, and Lombok, Indonesia. There are many different species of langurs that are found in India, Indonesia, and in Asia. The Javan langur resides in forested areas, mangroves, and fresh water swamps. These monkeys are herbivores and favorite foods include flower buds, flowers, ripe or unripe fruit, leaves, and occasionally insects and larvae. Researchers have also observed langurs living on teak plantations. All langurs have enlarged salivary glands along with an asacculated or chambered stomach to aid in the digestion of the cellulose plant material they consume. The females give birth to one offspring every 18-21 months. Gestation is 170-200 days, and the infants are born able to see and move around. The infants become independent at 1 year old and the adolescent males then leave the group or troop. They live in all-male groups until old enough and strong enough to become an alpha male. Each troop has one, or sometimes two males, and both of the males will both mate with the females in the troop. The Alpha males are also the protectors of the groups. Langurs are territorial and give out warning "hoots" to warn other troops. Males in the all-male troops rarely fight amongst themselves, whereas, the females tend to be more aggressive to other females within their troop. However, females care for all infants in the troop, which is known as allomothering. Langurs breed all year round so there are always infants in a troop. Troops usually have 7- 23 members.

The Javan langur is listed as "Vulnerable" on the IUCN Red List of Endangered Species. Humans are the only known predator at this time. Langurs are illegally hunted for food or captured alive for pets. The habitat of the Javan langurs is being destroyed by deforestation for human habitats, agriculture, and illegal logging. Fortunately, some of these adorable monkeys live on protected reserves.

Picture of the javan langur by Belgianchoclate, licensed under the Creative Commons Attribution 2.0 Generic license.

The Ebony leaf monkey, javan langur is listed as Endangered (EN), considered to be facing a very high risk of extinction in the wild, on the IUCN Red List of Threatened Species

Some facts about the
Javan langur