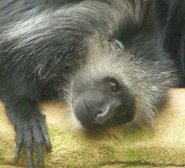 The king colubus (Colobus polykomos), which is referred to also as the Western black and white colobus, is an arboreal monkey who is indigenous to central and western Africa, including countries such as Nigeria, Liberia, Togo, GuineaBissau, and Ghana. The monkey is an Old World monkey which is primarily found within the lowlands and the subtropical rainforests.

The gestation period of the monkey is about 185 days with female maturity being reached in 1642 days and male maturity being reached at 730 days. The female king colobus has one litter each year with one baby being the result of each gestation period. The interval between litters is typically about 442 days. The maximum longevity of the animal has been reported to be 34 years.

The King colobus eats primarily leaves but has also been known to snack on flowers and fruits as well. Despite the fact that the animal is arboreal, it does not feed in the trees but obtains the majority of its food from the ground in its habitat. The animal usually lives within small groups that consist of between 1 and 3 males and 3 and 4 females, not including the young animals. Each of the groups live fairly far from other groups with territories being defined through territorial calls that are called in order to designate a particular area.

There are no well known predators of the King colobus but, due to its location, it is believed that leopards, raptors, as well as large snakes could be a potential threat to the black and white monkey. The animal is distinguished from the other species in the colobus genus by their white markings which are present on its chest, tail, and whiskers. Additionally, unlike other species of monkeys, the animal also has reduced thumbs and silky fur.

The King colobus monkey has been identified as an NT or Near Threatened species. This means that they are close to being labeled as a threatened species category sometime in the not so distant future. Therefore, special care must be taken in order to preserve the species.

Some facts about the
King colobus