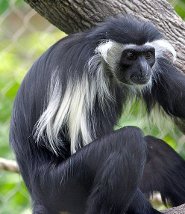 The Angolan colobus (Colobus angolensis) belongs to a group of five species of Black-and-white colobus in the genus Colubus. All five have similar unique characteristics, including a very long tail and long, soft hair. They are without thumbs, unlike any other species of monkey. In fact, the word colobus means "mutilated one". They are mostly black, with long white fur on their shoulders, tails, eyebrows, cheeks and neck. This makes them truly look similar to Cruella Deville.

These beautiful monkeys are medium sized, with the males being slightly larger than the females. At maturity they range from 13 to 26 pounds (6 to 12 kg) and males can grow up to 2 ½ feet long (76 cm). They are native to many African countries, including Nigeria, Zaire, Ethiopia and Kenya.

The Angolan colobus monkey can be found living in a wide range of habitats, from swampy areas and savannas, to tropical forests and high altitude areas. They prefer to stay high in the treetops, but will come to the ground to feed on vegetation and to drink. Like most monkeys, they eat primarily leaves, but also feed on small insects, tree bark, fruits and flowers. Among their favorite foods are the leaves of the Hackberry tree.

Colobus monkeys are territorial, and tend to live in small groups, though very large troops have been seen occasionally. There is often just one male with many females, and he actively protects them by roaring and jumping to scare off possible predators. Since they stay in the canopy most of the time, they avoid many of their natural predators, though they are preyed upon by animals that can climb or fly, such as leopards, large eagles, but also humans, sadly.

Angolan colobus babies are born after a gestation period that ranges from 147 to 178 days. Mothers usually have just one baby, though twins do occur. The babies are all white at birth, and become bi-colored when they are about three months of age. They are not weaned until they are 15 months old.

These monkeys have a long life span, living up to 20 years in the wild. They have been known to live as long as 30 years when raised in captivity, however. They are quite abundant throughout Africa, but are threatened by the destruction of their natural habitats. In addition, they are hunted for their meat and hides, causing their population to decrease rapidly in some areas.

The Angolan black-and-white colobus, angolan colobus is listed as Least Concern (LR/lc), lowest risk. Does not qualify for a more at risk category. Widespread and abundant taxa are included in this category, on the IUCN Red List of Threatened Species

Some facts about the
Angolan colobus