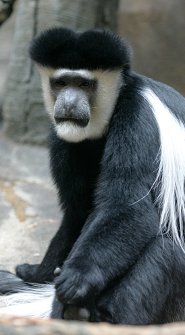 The Guereza (Colobus guereza) is a beautiful primate that is known by many names - Mantled Guereza, Black and white Colobus, Magistrate colobus, or Abynisian Black and white Colobus. It has long hair - black and white - with a white patch of long hair cascading to the sides, from the back, usually a U shape and has a white face and the top of its head is black, looking like it is wearing a fur hat. The long hairy tail has white hair that spreads like a horse's mane; it also has black in it. This remarkable animal would resemble a giant skunk with a primate's face.

The Guereza can be found in Africa, especially in the regions of the east and west central. This mammal grows to be 18-28 inches (or up to 61.5 cm) and the tail is about as long as the body or longer. The tail is longer than the entire body. It can weight from twelve to thirty pounds (or 9.3 -13.5 kilograms). The Colobus guereza likes to sit on top of branches and to jump from tree to tree, thanks to its posterior muscular short legs. It also has very small thumbs - almost absent. The babies are all white when they are born (every twenty months) and obtain their particular fur markings later. Babies mature to adult in four to six years. The gestation lasts five months. This animal can be found in the forests that are closer to bodies of water. It likes to eat fruits, flowers, leaves, seeds, and other vegetation types. One important fact is that its large stomach is capable of processing the type of food it eats - a stomach with multiple chambers. The Guereza is diurnal, and likes to go high on the trees. However, it can also live in grassy areas or lowlands. This monkey spends half of the day resting, and the rest feeding, sitting, or galloping/leaping. In captivity, they can live up to 23 years.

This species has its own territory and groups of six to nine live in about forty acres (160,000 m2) of land; they warn other groups of their presence by using sounds and making noises. However, they can share part of that territory with other groups, and they live among other types of primates. They socialize with other species. It has two major predators - the Crowned hawk eagle and the Chimpanzee. It is not considered a threatened species.

The Eastern black-and-white colobus, guereza, magistrate colobus is listed as Least Concern (LR/lc), lowest risk. Does not qualify for a more at risk category. Widespread and abundant taxa are included in this category, on the IUCN Red List of Threatened Species

Some facts about the
Guereza