Diana Monkeys - The Most Heedful of All African Monekys 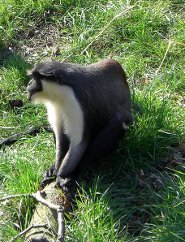 The Diana Monkey (Cercopithecus Diana) is among the highly endangered species. Among all African monkeys, the Diana monkey is the least known. Its body is medium sized with long legs and a slim built. Length of an adult male body is about 20.07 to 24.40 inches (51 to 62 cm) while the female adult body is 16.53 to 17.71 inches (42 to 45 cm) long. Its long tail is often curved in the shape of a question mark sign. Length of a male tail is 29.92 to 35.43 inches (76 to 90 cm) and that of a female tail is 20.47 to 28.74 inches (52 to 73 cm). It has a black face consisting of a white brow line, beard, and cheeks. The inner side of its arms and the frond part of its chest are also in white, while its tail, belly, and outer limbs have a covering of black fur. It has a prominent white stripe running diagonally down its outer thighs and its rump bears cream or red fur. Although size of males is significantly bigger than that of females, both genders have more or less similar appearance. Weight of an adult male monkey is about 11.02 to 11.9 pounds (5 to 5.4 kg) while the female adult body weighs about 8.81 to 11.02 pounds (4 to 5 kg). Common habitats of this threatened primate include primary and a few secondary rainforests as also semi-deciduous and gallery forests.

The Diana monkeys are arboreal in nature and prefer staying in high canopy forests where it is possible for them to rummage during the daytime for leaves, fruits, and insects. They are mostly seen in large groups composed of 5-50 individuals. These groups consist of one male and several females (generally 10) and their young ones. A well-know fact about diurnal primates is their tendency to live in groups as their main defense strategy. Groups can ensure safety to a large extent, since it is easier for individuals to alert other group members whenever they sense any danger. However, this behavior is noticed most frequently and in the most organized manner in Diana monkeys who are so vigilant that members of other primate varieties come to stay with them to derive maximum benefit from their observant eyes.

Breeding in Diana monkeys occurs all round the year. The gestation period lasts for six months and the female gives birth to a single young one after every six months.

Main subpopulations of this species are found in Liberia, where two civil wars have prohibited the execution of any comprehensive survey on the status and distribution of Diana monkeys. Estimates show that as much as 50% population of Diana monkeys from this country alone have probably died out as a result of hunting over the past three generations. Apart from hunting, this primate is also suffering dramatically because of lack of any wildlife protection, the increasing requirement for food, and the continued accessibility of firearms in Liberia and other countries.

Picture of the Diana Monkey by Andrew Gray, licensed under GFDL

The Diana guenon, diana monkey, roloway monkey is listed as Endangered (EN), considered to be facing a very high risk of extinction in the wild, on the IUCN Red List of Threatened Species

Namings for the Diana monkey

Some facts about the
Diana monkey