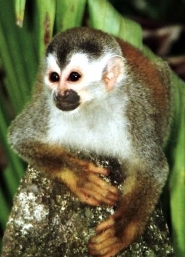 Sadly, the rather appealing appearance and amusing nature of the Central American Squirrel Monkey (Saimiri oerstedii) is one of the factors that has led to the decline in wild populations throughout its natural habitat in Panama and Costa Rica. This tiny monkey was prized by exotic pet collectors and therefore captured for sale abroad by unscrupulous traders. The masked primate continues to lose more and more of its natural habitat to deforestation, and it remains a target for hunters. In 2008, the IUCN status was upgraded from "endangered" to "vulnerable," even though there are approximately 5000 specimens of this monkey in the wild, down from 200,000 in the 1970's.

The species is considered omnivorous; it feeds on fruits and plant materials as well as insects, insect larvae, bats, birds, lizards and other small vertebrates. Farmers often complain that these monkeys eat mango crops, which is the main reason that hunting of this species continues even though its population has already been so substantially reduced. The Central American Squirrel Monkey is particularly adept at hunting bats; its method of preying on bats consists of attacking bat tents and eating bats that do not flee in time.

In turn, the Central American Squirrel Monkey is vulnerable to predators, including snakes, a native species of falcon and other birds, as well as cats. Over 50% of infant monkeys do not survive to adulthood due to bird attacks, despite a remarkable warning system through which males make a high-pitched alarm sound to warn of oncoming birds of prey.

In both Panama and Costa Rica, the Central American Squirrel Monkey lives only along the Pacific coast, where it lives among young trees, either in secondary forests which have regrown after deforestation, or in partially logged primary forests. Therefore, its habitat is very limited, and this, combined with its susceptibility to attacks by predatory birds and snakes, does not bode well for the survival of these little masked primates.

Some facts about the
Central American squirrel monkey