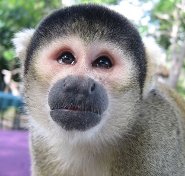 These primates have an average body length of 27 to 32 centimeters, about 10.5 to 12.5 inches. It weighs on average 950 grams or about 2 pounds. The Bolivian squirrel monkey’s coat is a mixture of gold and tan hues and is tipped in black. The coloring around its mouth and nose is black or dark brown, while the fur surrounding its eyes is white.

These little monkeys feed on a variety of things, including seeds, insects, berries and fruits. Bolivian squirrel monkeys have also been known to dine on small animals, such as birds or bats, and also on eggs. The Bolivian squirrel monkey is a gregarious, social animal that likes to live in large groups of typically 40 to 50 animals, although larger groups of 200 or more do occur. Unlike some animals, more than one male is allowed to live with the group, with young male monkeys often remaining with their family group until they reach the age of four or five. After that, young males usually leave the family group to live with other bachelors. Females usually remain with their family groups.

Picture of the Bolivian Squirrel Monkey by Ryan Hyde, licensed under the Creative Commons Attribution-ShareAlike 3.0 License.

The Black-headed squirrel monkey, bolivian squirrel monkey is listed as Least Concern. Does not qualify for a more at risk category. Widespread and abundant taxa are included in this category, on the IUCN Red List of Threatened Species

Namings for the Bolivian squirrel monkey

Some facts about the
Bolivian squirrel monkey