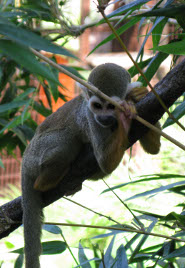 The South American squirrel monkey (Saimiri sciureus) is a small breed of primate native to both South and Central America, particularly countries such as Peru, Venezuela, Colombia, Bolivia and Brazil.

The height between the sexes is usually in the same range, from 269 to 318mm (10.6 to 12.52 in). Weight usually differs by gender, with males weighing from .649 to 1.25 kg (1.43 to 2.76lbs) and females weighing .649 to .898 kg. (1.43 to 1.98lbs) This weight can fluctuate because squirrel monkeys put on weight in the two months leading up to breeding season in order to appear larger and appear more favorable for selection. They also have the ability to store water and fat between muscle and skin on their upper bodies.

The species is often found in lowland tropical rainforest, but can survive in numerous different habitats. Their diets consist of fruits and insects, ranging from grasshoppers and caterpillars to nectar and flower buds. They also can consume small birds, bird eggs, and tent-making bats that hang in trees. They prefer small, berry-like fruits. Feeding grounds are often protected and monopolized by groups or clusters, leading to some fighting between them. They also often are found feeding and traveling alongside capuchin monkeys. The decline was and is attributed to prevalence of hunting, deforestation of their habitats, and capture to be kept as small pets.

South American squirrel monkeys are most commonly known for their playful, empathetic nature -- and their habit of stealing common objects and food from humans, sometimes right out of the hands of passersby! Their main form of movement is through the treetops, and they are quadripedal, meaning they use all four limbs to get around.

The Common squirrel monkey, south american squirrel monkey is listed as Least Concern. Does not qualify for a more at risk category. Widespread and abundant taxa are included in this category, on the IUCN Red List of Threatened Species

Some facts about the
South American squirrel monkey