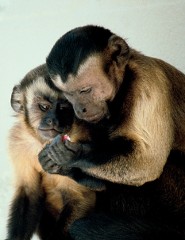 The brown capuchin (Cebus apella) is a clever, little monkey whose range includes a number of South American countries, including Colombia, Ecuador, Peru, Bolivia, Brazil, Venezuela, Suriname, Argentina, Guyana, Paraguay and French Guiana, Guyana. Brown capuchins adapt well to a variety of habitats and can be found in the understory and the middle and lower canopy of savannah forests, subtropical and tropical rainforests, as well as mangroves.

The brown capuchin monkey, which is also known as the black-capped capuchin and tufted capuchin, has a distinctive cap of black or dark brown fur on top of its head. It also typically has dark sideburns, black tufts of fur above its ears, and dark-colored feet and hands. The monkey's main coloring is a light brown to black, while its stomach and shoulders are a lighter color that the rest of its body. It has a long, dark prehensile tail, which it carries in a tight coil. The monkey's dark cap is said to resemble the cowls worn by the Capuchin monks for whom it is reportedly named.

Brown capuchins are small monkeys, typically weighing about 2.64 kg or a little under 6 pounds. Its total body and head length is about 444 mm or about 17.5 inches. Female brown capuchins are usually smaller in size. The tail is about the same length as its body.

These little primates are omnivores, which means that they will devour a large variety of items, including fruits, nuts, vegetation, insects, eggs, as well as small vertebrates such as frogs and small mammals. Brown capuchins that live near the water will also eat shells and crabs, and they have been observed using tools such as stones to crack apart these hard-to-open items.

Brown capuchins are arboreal, meaning they live, hunt and sleep primarily in trees. This primate is a territorial animal that live in groups of approximately 18 animals that is led by a dominant male. Juvenile males can stay with their troop until they reach sexual maturity, at which time, they will leave to find a new group in which to live. Female brown capuchins normally stay with their family group.

Cebus apella does not appear to have a set breeding season and are also polygamous, with females at times mating with more than one male. Brown capuchin females usually give birth to one baby, although they do occasionally have twins.

Luckily, the brown capuchin is still quite common and widespread in the wild, and it is currently listed as a species of Least Concern on the IUCN’s Red List.

The Brown capuchin, guianan brown capuchin is listed as Least Concern. Does not qualify for a more at risk category. Widespread and abundant taxa are included in this category, on the IUCN Red List of Threatened Species

Some facts about the
Brown capuchin