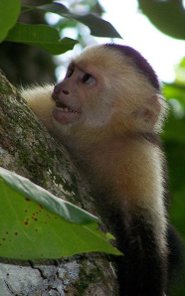 The White-headed Capuchin (Cebus capucinus), also known as the White-faced Capuchin and sometimes as the White-throated Capuchin, is a New World Monkey from South America and Central America, with a range that includes Panama, Ecuador, Costa Rica, Honduras, and parts of Columbia. They are a very versatile and adaptable species, which is considered a least-concern in the IUCN red list. They are able to adapt to their changing environment and have an omnivorous diet. They are usually around 8-9 pounds (3.9-4.2kg) and are usually 12 to 19.6 in (33-50) cm in length, with a prehensile tail that is an additional 15-21 in. (40-55cm) in length. The White-headed Capuchin's diet consists of an omnivorous mix of fruits and insects, and sometimes small birds, seeds, and small mammals. They are arboreal, but it will go to the ground more often than other relative New World Monkeys.

They usually live in groups of 5-30 individuals which have multiple males; however there is a hierarchy which starts with the Alpha Male, followed by the Alpha Female, and so on. As a social species they practice grooming, where the lower ranked members groom the higher ranked members and so on. Females of the species will form coalitions and stay with each other closely, when a new male or group of males attempts to take control and oust the other males they usually stay to themselves and cut off interacting with the males to keep themselves and the infants safe, however sometimes they will join with the males against intruding males. Interactions between troops seem to normally be aggressive and antagonistic in nature, however violence is usually a last resort. They will interact with other species of New World Monkey that are closely related, such as the various subspecies and even Geoffroy's Spider Monkey - and in rare instances going so far as travelling with and grooming them. On the flip side, there are violent fights between the two species as well as this sympatric behavior. They may also interact with howlers, however it is limited and mostly when young of both species play.

There are three subspecies of White-headed Capuchin, which are all closely related and will willingly interact socially (whether this is with aggression or not is dependent on the situation).

They are able to use tools to help with food gathering, and are very skilled at adaptation and problem solving. They are, because of this, considered one of the highest in intelligence among other species in the new world and they have been studied for many years, and their intelligence is only ranked below the spider monkey in New World monkeys. If threatened by snakes they will pick up sticks and use them to beat the snake, and drive it away, or even to rescue an infant. In one example of tool use while captive (they usually use tools for food or for or in defense) a White-headed Capuchin actually picked up and threw a Squirrel Monkey at a human. In addition to tools they also rib certain plants on themselves and their fur in order to prevent parasites and deter insects, additionally they also use ants and millipedes, which release an irritating chemical normally, to further enhance this characteristic. It is because of their high intelligence and ability to learn and be trained that they have become service animals for humans that are disabled, such as paraplegics who cannot use their legs and quadriplegics who cannot use their arms or legs. They have a long history of being in the media as well, such Katie who played Marcel in the television series Friends.

In addition to Friends, a White-headed Capuchin was featured in the film Outbreak.

Picture of the white-headed capuchin by Michelle Reback, licensed under GFDL

The White-faced capuchin is listed as Least Concern. Does not qualify for a more at risk category. Widespread and abundant taxa are included in this category, on the IUCN Red List of Threatened Species

Some facts about the
White-faced capuchin