White-fronted capuchin - able to find what is under the rock. 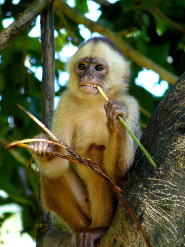 The White-fronted Capuchin (Cebus albifrons) is a small, omnivorous monkey found throughout the northern half of South America. The primate's range currently stretches across seven countries: Bolivia, Brazil, Colombia, Venezuela, Ecuador, Peru, and Trinidad. The animal was discovered by Alexander von Humboldt in 1812, although there was some confusion about the description of the animal because of the various colors found across the 5 different subspecies. The primate is usually a creamy white color in front (hence the name White-fronted Capuchin), although the area that is "white" in the front can range from a creamy white color to a cinnamon brown color depending on the subspecies. Males are larger than females, with males averaging 3.4 kg (7.5 lb) while females average 2.9 kg (6.4 lb).

While the primate is primarily arboreal, it forages for food at all different levels of the forest. The animal often goes to the forest floor to obtain its diet that consists primarily of fruits, insects, frogs, lizards, and bird eggs. One of the notable traits of the White-fronted Capuchin is that it is a primate that is capable of manipulating objects; while it is common for larger, more advanced primates like chimpanzee to manipulate objects, the White-fronted Capuchin is one of the few small primates that have exhibited this trait. The White-fronted Capuchin has been observed in the wild examining leaves and turning them over to find insects and other food sources, and this ability is an example of adaptibility and intelligence that is not common in the smaller primates. The primate forms social groups called troops, with the older, alpha males leading the group and protecting members of the group from other troops and predators. Males are polygamous, and the gestation period for the primate is 160 days.

Only one baby is born at a time, and all members of a troop participate in playing with and helping raise the young.

The White-fronted capuchin is listed as Least Concern. Does not qualify for a more at risk category. Widespread and abundant taxa are included in this category, on the IUCN Red List of Threatened Species

Some facts about the
White-fronted capuchin