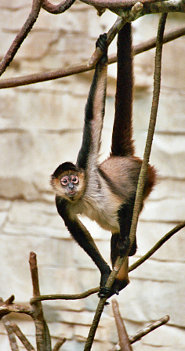 The Central American Spider Monkey (Ateles geoffroyi), also called Geoffroy's Spider Monkey or the Black-handed Spider Monkey, lives in the canopies of tropical forests throughout Central America, southern Mexico, and the northwest coast of South America. These monkeys are 12-25 inches (30-65cm) tall with a tail 24-33 inches (60-85cm) in length. Weight for a full grown monkey can range from 13-20 lbs. (6-9kg) with males weighing slightly more than females. There are several subspecies of this spider monkey with varying fur colors ranging from blond to dark red, but they all have some black fur.

These monkeys practice "fission-fusion" grouping: At night they gather in groups of twenty to one hundred monkeys which split into groups of two or three during the day to search for food. The only primates that share this trait are chimpanzees and humans.

Central American Spider Monkeys are believed to be the fourth smartest primate behind humans, chimpanzees, and orangutans. They have been seen using tools in two ways: They often rub a mixture of ground lime tree leaves and saliva into their fur which may act as an insect repellent. When frightened the monkeys will break off branches and drop them on the threat. Their primary predators are large cats including pumas, jaguars, and ocelots. Large snakes and birds of prey have also been known to eat spider monkeys on occasion.

Often the monkeys don't have to resort to breaking branches. They warn potential predators by make a loud barking sound like a dog; locals know enough to stay out of a monkey’s way or risk blunt trauma. If a monkey is separated from its group it whinnies like a horse.

Central American Spider Monkeys are an endangered species. Logging has limited their habitat while they have been hunted for food or to be kept as pets. The majority of the monkey's diet is fruit and nuts, although they have been known to eat honey, bark, and insects when their preferred foods are in short supply. Scientists have noticed a decline in the number of spider monkeys in the year following an El Niño. The weather from this phenomenon reduces the amount of food available to the spider monkey and there is some concern that increases in El Niño strength from climate change could have a long term effect on monkey populations. These monkeys can contract malaria, making them a valuable tool for studying the disease but this also means they are susceptible to outbreaks.

Efforts to protect the monkeys have concentrated on restricting logging and mining in their habitat. Spider monkeys will breed in captivity which has prompted zoos to start breeding programs which will increase wild populations.

The Black-handed spider monkey, central american spider monkey, geoffroy's spider monkey, mono colorado is listed as Least Concern. Does not qualify for a more at risk category. Widespread and abundant taxa are included in this category, on the IUCN Red List of Threatened Species

Some facts about the
Central American spider monkey