Jaguar - Most powerful feline of the america's

What's the difference between a jaguar (panthera onca) and a leopard? The easiest way to distinguish them would be to look at their rosettes. The jaguar has larger and less rosettes than the leopard. It is also larger and has a square face in comparison with the leopard...

Besides the tiger, it is one of the few cats that enjoy swimming. From wikipedia: They are considered an umbrella species and apex predator. An umbrella species is defined as: species that generally cover large areas in their daily or seasonal movements. They serve as "mobile links" at the landscape scale, through predation, seed dispersal or pollination. Protecting enough habitat and connectivity to assure viable population of these organisms benefits many other species more restricted in their range (source).

Their range is from Mexico to South America and are even spotted in Arizona and New Mexico (see image). 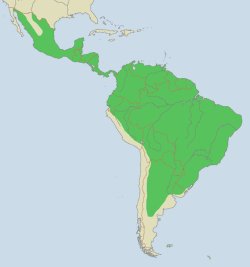 The Jaguar is listed as Near Threatened (NT), is close to qualifying for or is likely to qualify for a threatened category in the near future, on the IUCN Red List of Threatened Species

Some facts about the
Jaguar