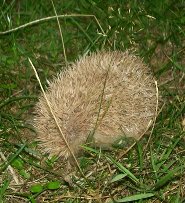 The Western European Hedgehog (Erinaceus europaeus) lives a solitary life from Ireland to South Scandinavia to North-western Russia and from Portugal to Germany and Italy. There are also a few in New Zealand which were brought by settlers. They are 23 to 28 centimeters (9 to 11 inches) long, oval shaped bundles of brown and yellow spines. Adults weigh from 400 to 1,200 grams (14 to 42 ounces) with a short tail of 1.5 to 3 centimeters (0.5 to 1.2 inches). They are commonly seen in meadows and forests but are most often found in orchards, vineyards, gardens, parks and farmland. They also live in urban areas where there are gardens or parks.

Western European hedgehogs are nocturnal insectivores and eat mostly spiders, worms as well as insects and other invertebrates, but they will also seek eggs and fruit. In captivity they will eat almost anything. They have become popular pets, but they are most often seen in gardens where they are welcomed because they eat the spiders and insects that are considered pests. One tip: do not feed them milk as they cannot digest it!

In cold climates in the north they hibernate from four to seven months and mate in the spring and summer. The young are born helpless without spines which begin to appear a few hours after birth. They live in the nest for six weeks with only the mother. At six weeks they are pushed out of the nest to fend for themselves. Other than for mating and raising the young the adults live alone and do not set up territories the way other insectivores do. They do spread large amounts of saliva on their body when they encounter a strong odor, but the purpose for this is not known.

Western European hedgehogs are not endangered and are rated Least Concern. However, they are hunted for food and some of their natural enemies are badgers, foxes, dogs, pine martens, large birds of prey and pole cats but this is not considered a danger to the species. When they feel threatened they tuck their heads and legs, which have no spines, under their belly and roll into a ball of bristling spines. They are also vulnerable during hibernation to the gnawing of small rodents.

They can run long distances, are good swimmers and climbers and with their long nose, round body and little black eyes they look cute and often appear as characters in children's stories.

The Northern hedgehog, western european hedgehog is listed as Least Concern (LR/lc), lowest risk. Does not qualify for a more at risk category. Widespread and abundant taxa are included in this category, on the IUCN Red List of Threatened Species

Namings for the western European hedgehog

Some facts about the
Western European hedgehog