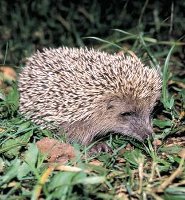 The Amur Hedgehog (Erinaceus Amurensis) is more commonly known as the Chinese Hedgehog. One of the fourteen different species of hedgehog that can be found in the world today, it is native to Amur Krai and Primorye in Russia, Manchuria in China, and the Korean Peninsula. The Amur Hedgehog is like any other hedgehog, They prefer tall grasses and undergrowth, such as under hedges and bushes. In the wild, their main diet consists of insects, worms, centipedes, snails, mice, frogs, and snakes. Hedgehogs in general were given the name because of the noise they make when foraging for food. Hedgehogs have very poor eyesight, so when foraging, they depend on their senses of smell and hearing rather than their eyesight. All that sniffing causes a pig-like grunt to be emitted, hence the name hedgehog.

Visibly, the Amur Hedgehog looks closest to the more common Western European Hedgehog, though it tends to be a lot lighter in color. The average weight of an Amur Hedgehog is 600-1000 grams (1.3 to 2.2 pounds) and it's average length can be anywhere from 5.5 to 12 inches (14-30cm). It's tail is usually 1-2 inches (1-6 cm) in length. The entire body of the hedgehog is covered in short, smooth spines that are used as a deterrent for predators. If the hedgehog feels threatened, it will curl into a ball, leaving only it's sharp spines exposed. Definitely not a very appetizing prospect to any of the hedgehogs natural predators, such as birds of prey or wild canines. The hedgehog also sleeps in this position, usually in a cool, dark depression or hole. A common misconception is that the hedgehog is a burrowing mammal. They do like to sleep in a depression or hole, but most usually find an abandoned hole made by another animal. They are a very solitary animal. Most often, if two hedgehog come upon each other during their nightly foraging, they will just go their separate ways, though occasionally they will fight. The only time hedgehogs mix with other hedgehogs on purpose is during the mating season. At the end of the mating season, they go their different ways once again, the female hedgehog raising any young that may have been conceived. Hedgehogs can have a litter of hoglets ranging anywhere from 1 to 11 in size. The female is very protective of the hoglets, because the male hedgehog has been know to eat the young.

Picture of the Amur hedgehog from http://lazovzap.ru

The Amur hedgehog, manchurian hedgehog is listed as Least Concern (LR/lc), lowest risk. Does not qualify for a more at risk category. Widespread and abundant taxa are included in this category, on the IUCN Red List of Threatened Species

Namings for the Amur hedgehog

Some facts about the
Manchurian hedgehog