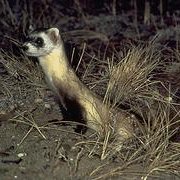 The Black-footed Ferret spends almost all its time under the ground. At night, they hunt prairie dogs but here is the fascinating part. This is one of those very rare cases where a predator-prey could suddenly switch places. Prairie dogs could attack as a pack and target a ferret.

The Black-footed Ferret was almost considered as extinct way back in the mid 80s, but fortunately, they were reintroduced from captured systems. A great deal of what we know now about these ferrets come from researches done (1964-74) on a group at South Dakota.

Canine distemper has been discovered in ferrets, and ferrets kept as a pet need to be vaccinated for ti.

Interesting fact: As of today, the total population of black-footed ferrets in the wild is over 600 individuals in the United States. The IUCN still classifies them as extinct in the wild, but this is due to the last update to the assessment having been in 1996 when the species was indeed only surviving in captivity.

The Black-footed ferret is listed as Extinct in the Wild (EW), known only to survive in cultivation, in captivity or as a naturalized population (or populations) well outside the past range, on the IUCN Red List of Threatened Species

Namings for the blackfooted ferret

Some facts about the
Black-footed ferret