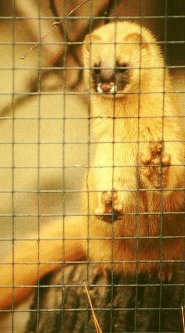 The Siberian weasel (Mustela sibirica), which is also referred to as the Yellow or Himalayan Weasel, is a relatively widespread animal indigenous to Asia. Due to the wide distribution and large population of the animal, they are classified as least concern for extinction.

The Siberian weasel has a long body and short legs but is huskier than their stoat relatives. The head of the animal is elongated as well as narrow with the ears being broad yet short. The tail is quite long and consists of approximately half of the creature’s length in total. The adult male weasel is about 28 to 32 centimeters or 11 to 12.6 inches in length with the females ranging from 25 to 30.5 centimeters or 9.8 to 12 inches. The weight of the male ranges from 650 to 820 grams or 23 to 29 ounces with the females being significantly lighter, ranging from 360 to 430 grams or 13 to 15 ounces.

The winter coat of the animal is soft yet dense with the underfur being quite loose against the body. The weasel is completely monotone in coloration, typically being straw-red although the skin may have a pale peach or orange tone.

The Siberian weasel has an long rutting period that depends largely upon the location in which the animal lives. The rut typically begins during the early part of February and ends in late March in the Siberian regions. They mate for approximately 35 minutes and do so repeatedly. The gestation period of the animal can last anywhere from 38 to 41 days, with the litter averaging around 6 kits.

Unlike most animals, the weasel is not particular about where it makes it home. They have been found in rotted out stumps, tree roots, and may also become squatters in the abandoned homes of other animals. Along with their permanent home, the Siberian weasel has about five additional shelters which serve as more temporary housing.

The weasel preys predominantly on rodents who are smaller than they such as water voles, voles, and mice as well as chipmunks, red squirrels, and muskrats. The predators of the creature primarily consist of owls and other birds of prey.

These weasels can be found in many parts of Asia including Laos, northern Myanmar, Pakistan, North Korea, India, Bhutan, Nepal, Russia (particularly in Siberia and the northern parts of the country), the northern part of Thailand, and Taiwan.

The Siberian weasel is listed as Least Concern (LR/lc), lowest risk. Does not qualify for a more at risk category. Widespread and abundant taxa are included in this category, on the IUCN Red List of Threatened Species

Namings for the Siberian weasel

The females are called 'bitch, doe or jill' and males 'buck, dog, hub or jack'. A Siberian weasel group is called a 'boogle'.

Some facts about the
Siberian weasel