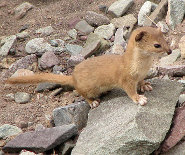 The Mountain Weasel (Mustela altaica) is a species of weasel that prefers to live at high altitudes, usually over 11,500 feet (3,505 meters). This species is sometimes referred to as the Pale Weasel or Altai Weasel, as well. Mountain Weasels have two coats; they molt their winter coats, revealing their summer coats, when the weather becomes warm each spring. The summer coat may be gray or gray-brown and sometimes consist of some pale yellow, as well. The winter coat is made of up a darker yellow colored fur, as well as some brown.

Male and female Mountain weasels differ slightly in size. The males are typically 12 to 17 inches (30.4 to 43 centimeters) long, from the nose to the tip of the tail. They weigh between eight and 12 ounces (.2 and .3 kilograms). The females range from 12 to 15 inches (30.4 to 38 centimeters) in length and weigh from four to eight ounces (.1 to .2 kilograms). Females feature smaller heads and shorter tails than males.

Mountain Weasels may be found in parts of East Asia, including the Himalayas, Mongolia, Korea, and northern China. They also sometimes appear in parts of Russia. They are most commonly found, however, in Ladakh, India. They reside in tree trunks, rocky caves or crevices, and the abandoned burrows of other animals. Sometimes, mountain weasels even take over the burrows of their prey. This prey may include small rodents, such as voles, and lizards. In turn, the weasels are occasionally preyed upon by large birds, wolves, or foxes.

Mountain Weasels live where there is an abundance of green vegetation at high altitudes. Their habitat is in danger of terrible depletion, making the future unclear for this species. Mountain Weasels are considered "near threatened" due to a significant decline in numbers in recent years.

The Mountain Weasel may be considered a natural athlete due to its extreme agility and versatility. Both males and females are capable of incredible feats of climbing, swimming, and running. They are natural contortionists and are among the most nimble animals in the world. Mountain Weasels typically sleep during the day, aside from a rare daytime hunt, but they can be observed capering and performing gymnastics nightly. They are solitary creatures except for when mating, though, so one mustn't expect a group show.

Mountain Weasels are beautiful, remarkably agile creatures whose high-altitude habitat must be protected in order to ensure that they are allowed to continue to romp and hunt on the Asian mountain slopes where they reside.

The Mountain weasel is listed as Least Concern (LR/lc), lowest risk. Does not qualify for a more at risk category. Widespread and abundant taxa are included in this category, on the IUCN Red List of Threatened Species

Namings for the mountain weasel

The females are called 'bitch, doe or jill' and males 'buck, dog, hub or jack'. A mountain weasel group is called a 'boogle'.