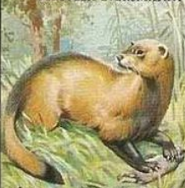 The steppe polecat (Mustela eversmannii), also called the masked polecat, Eversmann’s polecat or the Siberian polecat, strongly resembles a pet ferret (Mustela putorious fero.) Although biologists think the European polecat (Mustela putorious) is the direct ancestor of the domesticated ferret because the two species can interbreed, some biologists think that the steppe polecat may also be an ancestor to the pet ferret. Unlike domesticated ferrets, steppe polecats do not come in a variety of coat colors and are hostile to people.

Steppe polecats are found from Eastern Europe to China. Although not listed as threatened or endangered, steppe polecats primarily prey on large rodents like ground squirrels, marmots, water voles and pika. If the habitat for their prey is destroyed, then the steppe polecat will lose a major food supply. Steppe polecats have been observed eating lizards, frogs, willow grouse and grey partridges. Natural predators include birds of prey, jackals, stray dogs and foxes. Humans also prey on them, trapping steppe polecats for their fur and accidentally kill polecats trying to cross roads.

Steppe polecats grow larger than domesticated ferrets. They average 2 feet (60 cm) in length. Males are larger and heavier than females. One male in the wild grew to 31.5 inches (80 cm), but this is considered unusual. Males tip the scales at 72.31 ounces (2,050 grams) while females only average 47.61 ounces (1,350 grams. Their bodies are chestnut-brown with a dark dorsal stripe going down the spine to the tail and black feet. Their heads, undersides of the chest and belly are white, but there are dark brown markings over the eyes which make it appear as if the steppe polecat was wearing a bandit’s mask. Their lips and sometimes the tips of their noses are pink. Their winter coat is much thicker and slightly longer than their summer coats.

Steppe polecats prefer to live in grasslands, bases of mountains and arid deserts, but can also make homes in cultivated fields and pastures. They are most active at dusk and dawn. Each steppe polecat has several burrows in its territory. It prefers to commandeer the burrows of ground squirrels rather than dig its own. Each polecat lives by itself. Females keep permanent territories while males have territories overlapping females. The sexes only get together for mating in March and April.

After a gestation of 36 to 43 days, females give birth to one to eighteen kits or baby polecats. They are born blind, deaf and hairless. They stay in their mother’s burrow for two to three months, then come up and begin to learn to hunt. They can take down an adult ground squirrel by the time they are three months old. They soon leave their mother and fend for themselves. Although they can breed sooner, the kits do not become physically mature until they are two years old. It is unknown how old steppe polecats can live in the wild.

The Steppe polecat, steppe weasel is listed as Least Concern (LR/lc), lowest risk. Does not qualify for a more at risk category. Widespread and abundant taxa are included in this category, on the IUCN Red List of Threatened Species

Namings for the steppe polecat