The European Mink - A Species on the Verge of Extinction 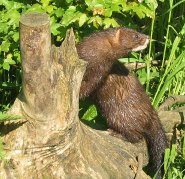 The European Mink (Mustela Lutreola) is considered as an endangered mammal species in Europe. The medium-sized European Mink has short legs, a bushy and short tail, and a long slim arched body. Its coat is blackish brown with white bands on the upper and lower jaws, sometimes including the throat. It can adapt to semi-aquatic life with its partly webbed feet which aid it in swimming, diving, and hunting underwater. Its eyes, however, are not well-adapted to see underwater prey and on the ground also, it has to depend on its sense of smell to forage terrestrial prey.

Although both the male and the female have a similar appearance, males are a lot larger. The reason of this difference can be attributed to the fact that males have to fight for territories and mates, while females feed and protect themselves and their offspring. A larger female may end up feeding itself by simply consuming more food. The young ones are quite similar to the adults. Today, it is on the verge of extinction and is seen only in some parts of Eastern Europe, France, and Spain and that too, on a very rare basis.

European minks are nocturnal animals and emerge only in night in search of food. They eat small animals like birds, vole, frogs, fish, crabs, and insects. They hunt in water, in swamps, on land, and burrows making their range of hunting considerably greater. The mink is known as a wanderer and rarely uses the same den. They are solitary mammals, except during the period from February to March, which is their breeding season. The gestation period lasts for 5 to 10 weeks and the female gives birth during spring because at that time the food is found in abundance. The female gives one litter every year and there can be 2 to 7 young ones in one litter. Their weaning period is about 10 weeks and the babies leave the den when they are 12 to 18 weeks old. After one year, the babies become mature and live up to only six years.

These semi-aquatic animals are found at nearby fresh water. They inhabit the shaded banks of rivers, lake shores, marshlands, and streams. One may also find them in burrows and muskrat huts. They make dens using grass, leaves feathers, and fur under trees, on stream banks, and in drift piles.

The European mink is listed as Endangered (EN), considered to be facing a very high risk of extinction in the wild, on the IUCN Red List of Threatened Species

Namings for the European mink

A young / baby of a European mink is called a 'cub or kit'. The females are called 'sow' and males 'boar'.

Some facts about the
European mink