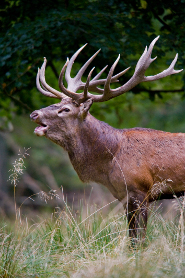 The Red Deer (Cervus elaphus) is one of the largest deer species in the world. Its remarkable size is amazing when you consider that most of its habitat encompasses many of Europe and Asia's coldest regions. This makes it interesting to study the Red Deer's habitat, its diet and its physical attributes.

Furthermore, it has one of the largest varieties of habitats in the world. The Red Deer is native to Europe, Asia Minor, the Caucasus Mountains and the Atlas Mountains in Africa. It also lives in Australia, New Zealand, South America because it was introduced into those areas by well-meaning humans. This wide geographic distribution has created unique habitats for the Red Deer. These habitats include woodland areas, forests and grasslands. This variety of habitats has created several sub-species of the Red Deer that are acclimated to the climates of these regions.

Its diet includes a variety of seasonal plants and grasses. Red Deer like to eat seasonal grasses, lichen, mosses and leaves off trees. If these foods are not available, Red Deer will also eat acorns, fruits and nuts that have fallen from trees. Stags will occasionally look for salt licks and other mineral deposits to keep their antlers in top condition.

They have several predators that keep healthier populations in check. The main predators of most Red Deer species are humans and domestic dogs. This is true because hunters in Europe, Asia and Africa enjoy hunting the Red Deer for sport and for food. The Red Deer also has to contend with wild wolves that tend to hunt for older or sicker animals. These predators have kept wild Red Deer populations in check throughout most of the world.

Stags use this distinctive "roar" that is used to defend its territory and mates from possible invasion by other males.

Picture of the red deer by Bill Ebbesen, 26. september 2009 in Jægersborg Dyrehave in Denmark, licensed under Creative Commons Attribution 3.0 Unported

The Elk, red deer, wapiti is listed as Least Concern (LR/lc), lowest risk. Does not qualify for a more at risk category. Widespread and abundant taxa are included in this category, on the IUCN Red List of Threatened Species

Some facts about the
Red deer