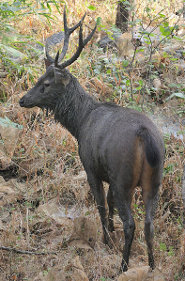 Sambar deer (Cervus unicolor) are beloved by human sport hunters and by many carnivorous animals still left in the wild. Also called the sambhur deer, fully mature adults can weigh up to 1,200 pounds (546 kg), which is as much as a thoroughbred horse. They grow nearly as tall as horse, too, at 40 to 63 inches tall (102 to 160 cm.) Deer are measured like horses – from the bottom of their hooves to the highest point of their shoulders.

Originally from south and Southeast Asian countries such as India, China, Borneo, Taiwan and Myanmar, herds have been introduced to Australia, New Zealand and three American states, Texas, California and Florida. The deer were introduced solely for the convenience of sport hunters and for gourmands. In the wild, sambar deer are favored prey of lions, tigers, leopards, crocodiles, Southeast Asian wild dogs (dholes) and feral dogs.

Sambar deer are elk-like in conformation, but sport a longer tail and a shaggy dark mane that stands up when the deer is threatening intruders. They sport a dull grey-brown coat with pale bellies and underneath the tail. Bucks grow a spectacular three-pronged rack that grows about 43 inches (110 cm) long. Adult deer, both does and buck, have a strange hairless red spot mid-way down their throats. Underneath the skin of this spot is a gland that secretes musk. When really frightened, both adults and fawns can emit high-pitched shrieks. Bucks bellow during the rut but does are quiet. Sambar stags often rub their antlers against tree trunks to mark their territory and may even rear up on their hind legs to do so.

Sambar deer prefer to live near water. They are not only excellent swimmers, but water can help relieve them of parasites and serve as defense against non-human predators. Smaller predators such as dholes cannot maneuver in water. Sambar deer have also been found 11,500 feet (3500 meters) up the Himalayan Mountains and snitching illicit snacks out of cultivated fields. Bucks live alone, except during the rut, while females and fawns live in small herds from 2 to 16 individuals.

Does have a gestation lasting seven or eight months. Normally, a single calf is born but twins occur in about 2% of sambar does. Fawns are born with light spots on a chestnut-brown coat, but these spots fade in weeks. They can walk within hours of birth and begin eating solid food at a mere 5 days old. Over the next two months, they transition from milk to an adult diet of twigs, tree bark, leaves, water plants, shrubs, herbs and fruits. Buck calves begin growing antlers when they are one year old. Unlike many other species of deer, calves stay with their mothers for up to 24 months. If lucky, a sambar deer can live nearly 20 years in the wild. The oldest sambar in captivity lived be 38. Sambar deer thrive in captivity.

Picture of the sambar by Wikigringo, licensed under the Creative Commons Attribution-Share Alike 2.5 Generic license.

The Sambar is listed as Least Concern (LR/lc), lowest risk. Does not qualify for a more at risk category. Widespread and abundant taxa are included in this category, on the IUCN Red List of Threatened Species

Some facts about the
Sambar