Topi or tsessebe pictures and facts

Topi - Socialites of the Serengeti 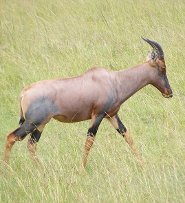 Topi (Damaliscus lunatus) are a medium-sized species of antelope that make their home in the southern regions of Sudan and the Serengeti National Park in Tanzania. Because of hunting and a loss of their natural habitat, Topi populations are scattered and isolated among the area. They prefer the Serengeti because of the large spreads of flood plains there. While their preferable habitat is this flat lowland, they can also be found in dry, open savanna and woodlands. If they have access to fresh green grasses, Topi can go without water for long stretches of time, taking to the shade of the trees during the hot daytime hours.

Topi have coats that vary in color from a distinct reddish-brown to a purple-tinted red. They have black patches on their head, upper legs, thighs, and hips. Their legs are yellow-tan in color that, combined with the bands of black, make them look like they are wearing stockings. Although females are a bit lighter in color than males, they both have back-curving horns about 21 inches (53.34 cm) long. Topi stand at a height of 3.5 to 4.5 feet (106.68 to 137.16 cm) and weigh 200 to 300 pounds (90.7 to 136.1 kg). Their average lifespan is 15 years, with females reaching maturity at 1.5 years and males maturing at 3 years.

Topi eat grass and only grass. They have a thin muzzle that had adapted so they can pick and choose the most succulent blades. If fresh grasses are available, they can provide water for the topi as well as food. If the grasses are dry or unavailable, they must drink water daily.

Topi are considered one of the most social mammal species of the Serengeti. They live in herds of 15 to 20, but have been seen in groups numbering in the hundreds. The social structure is considered very flexible for herd animals, although they are led by a dominant male. When large herds take a break from movement, the males create for themselves separate mini-territories in which they keep their females. Males vie for their own territory at the age of 4 or 5 years, but very few are yet powerful enough to win them. Mating is done strictly within the territories of the dominant males and timed so that birth occurs during seasons where feeding grasses are plentiful. Usually, this means breeding is done once per year, but in particularly good years, they will adjust and breed two or more times.

Topi do not limit their sociability to their own species. They can often be found among herds of other antelope, wildebeests, zebras, or even ostriches. Because they love to be around other species, they often must compete with them for resources such as food and water. Limited resources are their biggest threat, because of their speed. However, they still serve as prey for fast cats such as leopards and cheetahs. As well, they can also be hunted by lions and hyenas.

The Tsessebe is listed as Conservation Dependent (LR/cd), the focus of a continuing taxon-specific or habitat-specific conservation programme targeted towards the taxon in question, the cessation of which would result in the taxon qualifying for one of the threatened categories below within a period of five years, on the IUCN Red List of Threatened Species

Some facts about the
Topi