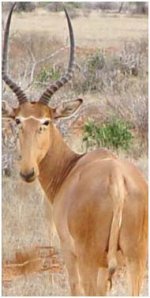 The average mass of a Hirola (Damaliscus hunteri) ranges from 80 to 120 kg, with an average shoulder dimension of 1 meter. As of the moment, experts contend that there are less than four hundred individuals on the face of the planet.

Competing with domestic cattle is believed to be the fundamental reason for the Hirola's dwindling numbers, but there are still other causes. Poaching is one, which is the reason for so many species going under the "near-extinction" roster. As far as the US is concerned, only a single Hirola exists in capture, that is, a female at Texas' Gladys Porter Zoo.

For those that are remaining, the Hirola is confined to territories in Somalia and parts of Kenya, but it has been introduced too at the Tsavo National Park. Not to put too fine a print on it, but this antelope is now Africa's most endangered antelope, and their numbers have both shockingly and sadly gone down to a very small number, a process mankind has witnessed for the past three decades.

These antelopes could be found on grassy, arid areas. They are diurnal (active on daytime), and during nighttime, they graze. Typical herds would have anything from 2 to 40 females, under the control (and we can safely guess, defense) of a male. During fights, a male would go down on its knees, but when it is wrestling with another, they are up on all legs.wikipedia.org/wiki/GNU_Free_Documentation_License" title="" rel='external'>GFDL