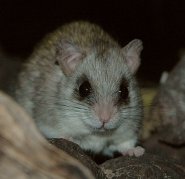 When most people think of rats, they picture hordes of rats running down crowded city streets, running into sewers or a hole in the wall, or scurrying into gutters. But the Acacia rat (Thallomys paedulcus) is not your average rat. It is a tree-dweling rat that lives in the hollows or forks of Acacia trees. It is a pretty, semi-exotic grey rat with dark fur around its eyes, with a white chin, underside and feet. Their bodies are between 4 and 6 inches or 101.6 and 152.4 mm long, and their tails are between 5 and 8 inches or 127 and 203.2 mm long. The average weight of an adult rat is 1 pound or approximately 453.59 grams.

Acacia rats are found in subtropical or tropical dry shrublands such as Kenya, Ethiopia, Mozambique, Namibia, South Africa, Swaziland, Tanzana, Zambia, Zimbabwe, Botswana, and the Democratic Republic of the Congo. They live mainly on leaves, buds and gum from the bark of Acacia trees, as well as berries, roots and insects. They have many predators, such as snakes, birds, and wild cats.

Currently, this species is listed as least concern on the IUCN Red List of Threatened, which means that it is widespread and abundant. However, Acacia trees in southern Africa are being harvested in abundance and may eventually cause the Acacia rat’s endangered status to be raised. The life span of the Acacia rat has not been extensively studied. Although they are not often seen in pet stores, they are sometimes kept as pets. Owners report them as living between two and three years.

Acacia rats are said to make intelligent and fun pets. Like other breeds of rats, they are social and should live in pairs or groups. They are avid chewers and must be kept in metal or glass cages as they will chew through wood or plastic. If kept as a pet, Acacia rats need a large cage, both in width and height. They love to climb on branches and ropes, and their antics are great fun to watch, especially late at night when they are most active.

The Acacia rat is listed as Least Concern. Does not qualify for a more at risk category. Widespread and abundant taxa are included in this category, on the IUCN Red List of Threatened Species

Namings for the acacia rat

A young / baby of a acacia rat is called a 'kitten, nestling, pinkie or pup'. The females are called 'doe' and males 'buck'. A acacia rat group is called a 'colony, horde, pack, plague or swarm'.

Some facts about the
Acacia rat