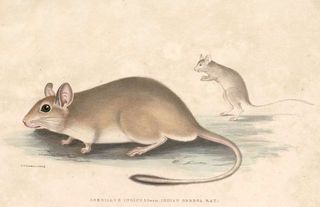 The Indian gerbil is listed as Least Concern (LR/lc), lowest risk. Does not qualify for a more at risk category. Widespread and abundant taxa are included in this category, on the IUCN Red List of Threatened Species

Namings for the Indian gerbil

Some facts about the
Indian gerbil

Facts about the Indian gerbil

Indian Gerbils are omnivorous and will readily eat insects and meat if offered.

Indian gerbils are the commonest gerbils in the Indian sub-continent.

In India, Indian Gerbils are very common in areas of human habitation and in Iraq and Syria it is almost only found near villages. (Full text)

However, the ones I once saw in The Netherlands seemed timid and looked like they would bite first and ask questions afterwards And Finally In Southern India and Ceylon the Indian Gerbil is dug out of its burrows as a source of food, but in the north the animal is thought too small to (Full text)