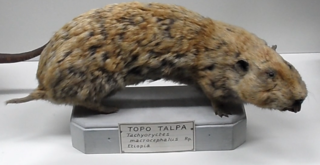 The Big-headed mole rat is listed as Vulnerable (VU), considered to be facing a high risk of extinction in the wild, on the IUCN Red List of Threatened Species

Namings for the bigheaded mole rat

Facts about the big-headed mole rat

Giant molerat, tachyoryctes macrocephalus, is found only in the high meadows and sub-alpine moorland of the Bale Mountains.

The vegetation assemblages in the North are different to those found in the South, and one the chief prey species of the wolves in Bale, the giant molerat (Tachyoryctes macrocephalus), is absent from the mountains north of the Rift Valley (Marino et al. (Full text)