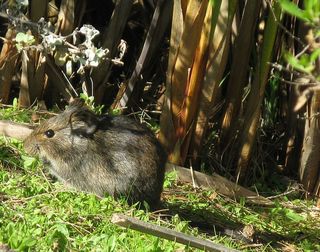 Picture has been licensed under a Creative Commons Attribution ShareAlike license
Author: JonRichfield

The Vlei rat is listed as Least Concern. Does not qualify for a more at risk category. Widespread and abundant taxa are included in this category, on the IUCN Red List of Threatened Species

Namings for the vlei rat

A young / baby of a vlei rat is called a 'kitten, nestling, pinkie or pup'. The females are called 'doe' and males 'buck'. A vlei rat group is called a 'colony, horde, pack, plague or swarm'.

Some facts about the
Vlei rat

Facts about the vlei rat

Behavior Angoni Vlei Rats are usually solitary but sometimes are found in pairs.

Otomys irroratus A "vlei" is an area of shallow, temporary standing water, thus Vlei Rats are associated with wet areas and stream verge habitats, although they will move into grassland.

Vlei Rat or Otomys irroratus is listed on the IUCN Red list (1996) as Lower Risk/Least Concern .

Vlei rats are notorious for having thick fur and also very big ears as far as rodents go and a blunt snout.

Vlei rats are specialist herbivores which, on the coastal plain, are only found in old growth.

The Common Vlei Rat is a blunt nosed rat with long, shaggy hair and rather a short tail. (Full text)

Vlei rats are most active during the day, and are most often seen either singly or in pairs. (Full text)