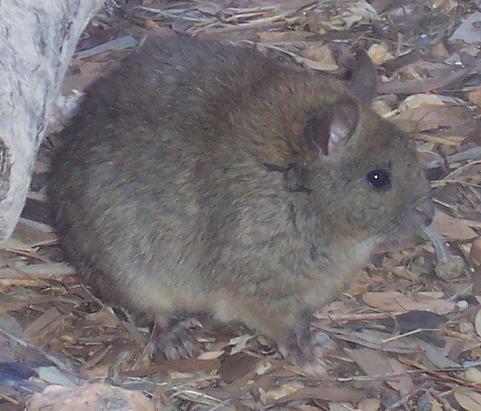 The Greater stick-nest rat, house-building rat is listed as Endangered (EN), considered to be facing a very high risk of extinction in the wild, on the IUCN Red List of Threatened Species

Namings for the greater sticknest rat

Some facts about the
Greater stick-nest rat

Facts about the greater stick-nest rat

The greater stick-nest rat (Leporillus conditor) is listed as PRESUMED EXTINCT on the schedules of the NSW Threatened Species Conservation Act.

Three threatened mammal species have already been reintroduced onto the island: Burrowing Bettong (Boodie) Shark Bay Mouse Banded Hare-wallaby The reintroduction of the Western Barred Bandicoot and Greater Stick-nest Rat is planned in the near future.

Leporillus conditor is a predominantly ground-dwelling, herbivorous rodent of semi-arid, perennial shrubland habitats, which builds nests of interwoven sticks for protection from the elements and from predators. (Full text)