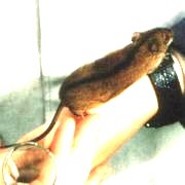 The Striped Field Mouse (Apodemus agrarius) is one species of mouse that owes its name to the black or dark stripe that goes down its spine. This rodent is natural to Europe and regions stretching all the way to Japan, including the regions of Siberia and Taiwan. This mouse is not considered a threatened species, rather of least concern according to conservation status classification. Its color is a light rich yellow-brown, which makes the dark striped along its back more prominent.

This little rodent can grow to be 70-140 mm long, but its tail can add 61-96 mm to those measurements. Its weight ranges from 12-49.5 grams approximate. This species can reproduce all year. Females usually have eight nipples and can give birth to six litters yearly; each litter may have up to six mice.

The striped field mouse likes to live in prairies, grasses, rice fields, the woods, gardens, marshes, cornfields, reedbeds, and forests. It is agile and capable of swimming and leaping. It lives in holes underground, which it inhabits during the nighttime, as this mouse is a diurnal animal. However, these patterns may change with the seasons becoming nocturnal during the summer, and diurnal during the cold months of winter. In autumn, it can be found during night and day. It prefers environments that have lots of foliage and a variety of grasses and vegetation and moist areas. It does not like arid areas or areas where the vegetation is not varied such as large forests. It is considered a species that is very widespread in Europe and beyond. Its diet consists mostly of insects and grains, seeds, berries, nuts, and plant roots. However, if found on wrong territory or environment it can damage food stores supplies or farm crops. It is considered to be a pest for agriculture. It has been known to be a carrier of hemorrhagic fever (HTNV).

In captivity, the diet should match what it eats in the wild as close as possible. This may include mouse mix of grains and seeds, green veggies, some servings of fruit, crickets, captive bred worms, wheat bread, and cheerios - the last two as a small quantity treat. However, junk food such as salty foods, chocolate, and other treats might harm these critters so it should never be fed to them. A vitamin supplement such as Nutrical - usually sold by veterinarians - is beneficial in very small quantities and reduced amounts and not to be overdone.

The reproduction of this species is high and natural occurrences such as rains, small predators, and freezing soils keeps it under control.

Picture of the striped field mouse by Silke Sohler, licensed under GFDL

The Striped field mouse is listed as Least Concern (LR/lc), lowest risk. Does not qualify for a more at risk category. Widespread and abundant taxa are included in this category, on the IUCN Red List of Threatened Species

Namings for the striped field mouse

Some facts about the
Striped field mouse