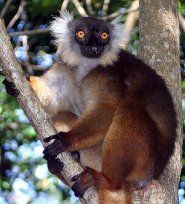 The Black lemur (Eulemur macaco) lives on the island of Madagascar and two tiny islands next to Madagascar, Nosy Komba and Nosy Be. This island contains some of the rarest species in the world, including all lemur species on earth. Lemurs are considered an ancient form of primate and a now-extinct lemur species is thought to be the ancestor of all primate species still alive, including apes, monkeys and humans. Today’s black lemurs provide evolutionary biologists insight over how human ancestors behaved.

Although black lemurs have few predators such as large birds of prey and the endangered cougar-like feline the fossa, they are highly endangered because their habitat is being destroyed. Without the Madagascar rainforests, there is not enough food for black lemurs to survive. Black lemurs do not do well in captivity, largely because so little about them is known. It is unknown how old a black lemur can live in the wild, although they can live up to 25 years in zoos.

Only males sport the glossy black coat for which the species gets its common name. Females are brown with and brown and white ears. Both sexes have yellow or brown eyes. The ears on both sexes are large, round ears like that of Mickey Mouse.

Males usually grow larger than females. They can grow as long as 110 cm long, while females grow only 35. 4 inches (90 cm) long. Over half of their body length consists of their long, thin tails. Males weigh up to 5.5 pounds (2.5 kg) while females only tip the scales at 4.4 pounds (about 2.kg)

Their bodies are flexible and similar to monkeys. They are more at home in the treetops than on the ground. Their paws, often called hands, include five long-fingered digits, including one thumb-like finger. They use these hands not only for climbing and grooming, but to harvest their food – leaves, seed pods, mushrooms, flowers, fruits and insects.

Black lemurs are highly intelligent creatures that enjoy each other’s company. They stick together in small family units of two to 15 animals. Females lead these family units. Males my travel from unit to unit during the mating season, which lasts the months from the beginning of June to the end of July. Females take care of the offspring. They often have twins. Males in the wild may take some part in raising the babies, but this is still not clear. Males in captivity have been known to kill babies.

Black lemurs primarily eat fruit. They need to live in a large area of many different species of tree that flower at different times of the year. Otherwise, they cannot get enough food to survive. Also, black lemurs need to bite but not eat poisonous millipedes. The bitten millipede secretes poison, which the lemur rubs over its fur. Just why they do this is still unknown. One theory is that the lemur gets a "high" from this habit.

Picture of the black lemur by Mbz1, licensed under GFDL

The Black lemur is listed as Vulnerable (VU), considered to be facing a high risk of extinction in the wild, on the IUCN Red List of Threatened Species

Namings for the black lemur

A black lemur group is called a 'troop'.

Some facts about the
Black lemur