The Brown Lemur - Get Ready for a Tall Tail 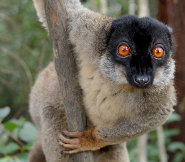 The Brown lemur (Eulemur fulvus) is a medium-sized primate. They are found on the island of Madagascar, located off the southeastern coast of Africa in the Indian Ocean. They have also been found to live on Mayotte, an island to the north of Madagascar. These lemurs range in length from 84 to 101 centimeters (33 to 40 inches), and weigh in at a mere two to four kilograms (four to ten pounds). Interestingly, the lemur's tail is usually as long as or longer than their body!

Brown lemurs are typically herbivores, eating fruits, flowers, and leaves, but they will, on occasion, eat centipedes, millipedes, and other insects. They will also consume bark, sap, and clay. Their habitat of forests, both rain forests and dry forests, ensures that they have an ample supply of food, with plenty of plant and animal life around to nibble on.

They are excellent jumpers, moving from tree to tree with ease and use their tail for balance when needed. They spend less than 2% of their time on the ground. When on the ground, they usually run around on all 4 legs.

Brown lemurs typically live in groups of 5 to 12 individuals. There doesn't appear to be any hierarchy among these groups and one group may claim up to 20 hectacres of territory. The gestation period for a Brown lemur is 120 days and the female usually gives birth to only one offspring, though twins have been reported. They can live to be 25 to 30 years old, and may live to be even older than that in captivity.

In terms of conservation status, Brown lemurs are considered to be "vulnerable". This is largely due to loss of habitat, as forests are destroyed by humans. As the human population of Madagascar grows, more forests are being destroyed for agricultural purposes, both the planting of crops and the grazing of animals. Lemurs are found in a variety of protected areas, parks, and in zoos, which should help to preserve their population. Their natural predators are eagles, hawks, or domestic cats who may eat a new born.

The Brown lemur is listed as Least Concern (LR/lc), lowest risk. Does not qualify for a more at risk category. Widespread and abundant taxa are included in this category, on the IUCN Red List of Threatened Species

Namings for the brown lemur

A brown lemur group is called a 'troop'.

Some facts about the
Brown lemur