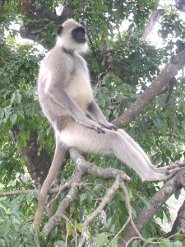 The Hanuman langur (Semnopithecus entellus) is a native of South Asia. The monkey got its name from a Hindu god and is considered sacred. Legend says the monkey god, Hanuman, burned down a town to save a woman and was consequently ensared in the blaze. The black face and hands of the langur are thought to represent Hanuman’s burns.

Langurs are widespread across the Indian subcontinent. They have a large span of habitats, from the plains to the rainforest. Excluding humans, langurs have the widest habitat range of any primate. Many are found in urban areas as well.

Their diet is vast and changes with the seasons. During the colder season, they eat matured leaves. In the warmer weather, their diet consists of fruits, bark, and tree gum. They also eat insects, nuts, and seeds. Langurs can digest things that other creatures can’t, like stones.

Hanuman langurs walk on all fours. They easily climb and leap across tree limbs. Though they sleep in trees at night, most of their daytime activity is on the ground. They travel in large groups, consisting of a dominant male with many females. Where food is plentiful, langurs form groups with many males. When male monkeys get thrown from the group, they form bachelor packs. A male from this group will come back to take over the alpha male’s position. The new alpha will kill all the infants, so he can reproduce immediately. Once they turn 51 months, females breed every two years. The gestation period lasts 200 days. Several females look after the newborn. Maturity comes in 3 years for females and 4 years for males. The average lifespan of the langur is 20 years.

The langur is considered endangered. The most common threats are tigers, panthers, and loss of habitat. Because langurs ransack urban food supplies, humans are a threat factor. Despite the possible risk of human retaliation, Hanuman langurs are revered by many because of their unique qualities and history.

The Common langur, entellus langur, grey langur, hanuman langur, true langur is listed as Near Threatened (LR/nt), is close to qualifying for or is likely to qualify for a threatened category in the near future, on the IUCN Red List of Threatened Species

Some facts about the
Hanuman langur