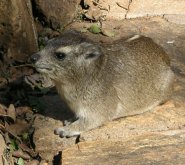 The Bush Hyrax (Heterohyrax brucei), otherwise known as the Yellow-spotted (Bush or Rock) Hyrax is a small mammal that is around 12-15 inches long (30-38 centimeters) and can weigh between 5 and 9 pounds (2.2-4 Kilograms) and has a distinctive coat of fur that is mottled with browns, yellows, and grays. It has short limbs, a black nose, short but alert ears, and large eyes. Their fur is made up of a short haired layer which protects them, and slightly longer coats which add to their colored looks. Their tail is nothing more than a small stump which is barely visible, and for a good size comparison think of an overweight bunny. The Bush Hyrax and its many subspecies are found throughout Africa, from Egypt to South Africa, and they prefer rocky terrains and mountainous areas, preferring elevations starting at sea level all the way to 13,000 feet (4,000 meters).

The Bush Hyrax, like all other Hyraxes have a very primitive self temperature regulation system that seems almost reptilian. They must bask in the sun to gain heat and then huddle together at night to retain heat. It is thought that the Hyrax has evolved very little from its origins. The Bush Hyrax lives mostly in arid areas, and can survive on very little water. The breeding season is uniformly in tune with the rainy season, and gestation (pregnancy) lasts up to eight months. The young mature quickly, and between one to five months of age they are weaned from their mothers.

They eat many types of vegetation and usually prefer bitter yams, which in the past have been used by humans to create poisoned arrowheads. When thicker meatier vegetation is scarce they will turn to grasses and other lesser vegetation to feed on. Because of their highly efficient kidneys they can subsist on very little water. Due to their smaller size, they are themselves the target of many predators, such as rock pythons, leopards, birds, and even some mongoose have been so brave. However they are vicious when threatened and will counter-attack savagely, biting anything and everything on the predator to save itself from being a meal.

The Bush Hyrax behavior is to have small family groups that huddle at night, and the groups are maintained by one dominant male, whose job includes territorial defense and maintenance. Often times, if the area is large enough, the male will have several small groups of females that he will control, in different but close areas. The remaining males who survive to leave and create their own groups usually live alone until this happens. Many may live solitarily their whole lives.

Interesting Facts about the Bush Hyrax:


Picture of the bush hyrax by Buecherfresser, licensed under GFDL

The Bush hyrax, yellow-spotted rock hyrax is listed as Least Concern. Does not qualify for a more at risk category. Widespread and abundant taxa are included in this category, on the IUCN Red List of Threatened Species

Some facts about the
Bush hyrax